Handgun and €300,000 worth of cocaine seized by gardaí in Dublin 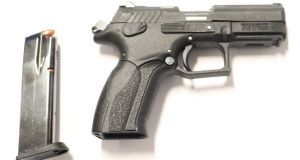 The Grand Power semi-automatic hand and ammunition seized during a series of raids in west Dublin. Photograph: An Garda

Cocaine worth an estimated €300,000, a firearm and ammunition have been seized following Garda raids on a number of properties in west Dublin.

A 29-year-old man was arrested during the searches which took place between September 19th and 20th as part of an ongoing investigation targeting crime gangs.

Cocaine with an estimate street value of €300,000 was seized during the raids along with a Grand Power semi-automatic handgun and ammunition.

Members of the Garda National Drugs and Organised Crime Bureau were assisted by personnel from the local drug unit at Blanchardstown Garda station in carrying out the searches.

The man arrested is being detained under Section 2 of the 1996 Criminal Justice (drug trafficking) Act at Blanchardstown Garda station.

Assistant Garda commissioner John O’Driscoll said gardaí were targeting those suspected of being involved in organised and serious crime.

The investigation is focused on locating and seizing “the drugs they intend to sell within our communities and firearms they possess for the purpose of inflicting harm on others,” said the assistant commissioner.