Getting gardaí to enforce quarantine in homes ‘problematic’ 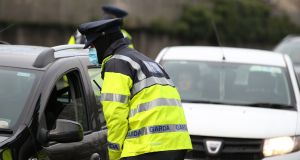 Government proposals to bring in new laws compelling incoming travellers to quarantine in their homes will raise constitutional issues if the Garda is asked to enforce it, the Irish Council of Civil Liberties has said.

Its director, Liam Herrick, said on Tuesday that many of the measures approved by Cabinet would negatively impact on people’s civil liberties.

The Government on Tuesday announced criminal sanctions and compulsory quarantine for incoming travellers who fail to produce a PCR negative test. Until now, while the advice has been for arrivals to self-isolate, it has had no legal basis.

Minister for Justice Helen McEntee said that while the new measures were designed as a deterrent, quarantine adherence would see spot checks by gardaí although details had yet to be “worked through”.

“They will be able to call to people’s homes and obviously if somebody is found not to be quarantining then because it is a penal provision they could face up to a €2,500 fine or six months in prison but we don’t want it to get to that point,” she told RTÉ’s Six One News.

Ms McEntee said many of the new regulations would be signed on Thursday and that quarantining facilities would rolled out by health officials working with gardaí.

Mr Herrick said: “The Government, by placing restrictions on travel and freedom of movement, needs to demonstrate the actions to be necessary and proportionate.”

He also said that such encroachment on rights needed to be shown to be temporary in nature, remaining in place for weeks, or for a short number of months, rather than over a longer time span.

“The measures that might be introduced now could have a long-term impact on the relationship between the police and the public which has been a constant concern of ours,” he said.

“Certainly any proposal to have An Garda Síochána enforcing behaviour in private homes, especially when policing health matters rather than criminal matters, is problematic.

“We have a community policing model and the Garda has always given respect to private life in the home. It is an essential principle of policing that gardaí do not enter the home without a warrant.”

Mr Herrick said that the issue of people privately quarantining in their home was a health issue or function, and not a policing one.

“The emphasis should be on health authorities [monitoring it] rather than trying to draw the Garda in to police private behaviour,” he said.

He said that some of the focus of the new measures was on indirect restrictions such as having checkpoints near airports or near the Border. He said that was positive in that the Government was giving a clear message of policy that non-essential travel should not be taken.

“From a human rights perspective, restricting travel is more straightforward and less problematic than mandatory quarantine, or of police enforcement of quarantine in people’s home,” he said.

The restrictions, he added, needed to be very tightly time-bound, taking into account the situation with variants of the virus was changing all the time.

“It is essential that measures are very focused and there is a clear articulation of purpose. They need to be reviewed across very short period of time, we are talking weeks or months rather than extended periods,” he said.