‘Get Seánie’: The prosecution of Seán FitzPatrick 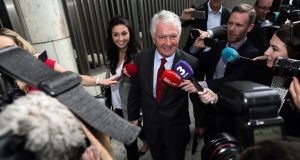 Former Anglo Irish Bank chairman Seán FitzPatrick leaving court after he was found not guilty of 27 offences under the 1990 Companies Act. Photograph: Courtpix

In February 2010, the then director of corporate enforcement Paul Appleby drafted a memo on how the criminal investigations into Anglo Irish Bank and Seán FitzPatrick were progressing.

The then taoiseach Brian Cowen and the then tánaiste Mary Coughlan were anxious for information. Appleby’s memo outlining the possible offences that were being looked into was delivered by hand to Coughlan. The Office of the Director of Corporate Enforcement (ODCE) boss wanted the details kept confidential, and arranged for the note to be hand-delivered back to him after it had been read.

Back then everything to do with Anglo and FitzPatrick was highly charged politically, and for good reason.

With the collapse of the banking sector, it was not just the economy and public finances that were under strain

In December 2008, when it was announced that FitzPatrick had resigned as chairman of the bank, it was also revealed that FitzPatrick had been concealing the huge loans he had with the bank by “warehousing” them with Irish Nationwide Building Society at the end of each financial year. By doing this he didn’t have to declare the loans in the bank’s annual accounts.

The disclosure of this unethical practice by the man seen as synonymous with Anglo led to a profound loss of confidence in the bank, and contributed to its early nationalisation.

The bank’s collapse would cost the public billions of euro, and was a step along the road that led to the Republic entering the humiliating troika bailout programme.

On the same day as FitzPatrick’s resignation was announced, the ODCE’s inquiries into the warehousing of his loans began. Soon the ODCE and the Garda Bureau of Fraud Investigations were involved in a number of interlinked inquiries concerning Anglo, the complexity of which was unprecedented for both agencies.

With the collapse of the banking sector, it was not just the economy and the public finances that were put under enormous strain.

On March 21st, 2011, there was a high-level meeting in the Department of Enterprise to discuss the various inquiries then under way arising from the financial collapse.

Those present included the then secretary general of the department Sean Gorman, his counterpart in the Department of Justice Sean Aylward, the then Garda commissioner Martin Callinan, Kevin O’Connell, a solicitor with the ODCE who was heading up the warehousing inquiry, his colleague Sean Ward, and others. Appleby was not present.

Gorman told the meeting that there was a need to keep the Cabinet informed as to what was happening. There was a keen public interest in the inquiries, and growing impatience with the pace of progress.

The independence of the agencies involved was “fully respected”, and there was a clear desire “at all levels” that nothing would be done that would impinge on this. Nevertheless, it was legitimate and necessary that the government be kept up to date on developments.

The secretaries general were briefed on the complexity of the investigations. These topics included multibillion euro back-to-back loans used to boost Anglo’s balance sheet, loans to Anglo directors, the warehousing issue, loans to the family of Sean Quinn, and the loans to the so-called Maple Ten investors.

The Garda and the ODCE were doing all they could in difficult circumstances, the meeting was told. It was hard to say how much longer the inquiries would take.

Aylward referenced the fact that the banking collapse was seen as having brought the country to its knees, and told the commissioner and the ODCE officials that any additional resources they felt were needed would be given. However both agencies said they had adequate resources.

In the trial that ended this week O’Connell said that, even though he had no experience of conducting serious criminal investigations, he became the lead investigator of the inquiry into the warehousing issue.

The Garda resources seconded to the office were mostly tied up with the inquiry into the granting of loans by Anglo to investors for the purchase of the bank’s shares.

Despite his lack of experience, O’Connell took on the role in the spirit of the “more for less” ethos then being asked of from public servants.

In July 2012, FitzPatrick was arrested and charged in relation to the loans to investors case, along with his former Anglo colleagues Willie McAteer and Pat Whelan.

The trial got under way in January 2014, and in April FitzPatrick was acquitted of all charges in relation to the so-called Maple Ten loans following a majority verdict by the jury.

Two other defendants were found guilty by the same jury. FitzPatrick’s counsel, Michael O’Higgins SC, said his client had been “singled out” by the prosecution.

The trial also involved charges in relation to loans given to the family of businessman Sean Quinn, but Judge Martin Nolan directed FitzPatrick’s acquittal on these charges on the grounds of lack of evidence to support the charges.

In April 2015, FitzPatrick went on trial again, this time on charges of failing to disclose to Anglo’s auditors, EY, information about the loans that he “warehoused” with Irish Nationwide. That trial collapsed after seven weeks.

Most of the seven weeks were taken up with legal argument in the absence of the jury, during which FitzPatrick’s counsel, Bernard Condon SC, explored how the ODCE had gone about taking witness statements from two EY audit partners.

The trial collapsed after it emerged that O’Connell, during what he described as a panic attack, shredded documents he found in his office which should have been discovered to the trial.

The panic attack, he said, was brought on by the realisation during the trial that the conduct of the ODCE inquiry had involved fundamental errors, and concern that he would be blamed for this while others would step away. A few days after shredding the documents, O’Connell sought psychiatric help, and was hospitalised for almost two months.

Despite these developments, the Director of Public Prosecutions decided to have a second go at prosecuting FitzPatrick on the same charges.

The second trial began in September of last year, was mostly taken up with legal argument, and culminated in the decision this week of Judge John Aylmer to direct the jury to acquit. It had sat for 127 days, the longest criminal trial to date.

In making his decision Judge Aylmer said the ODCE had conducted a partisan and biased inquiry, and had been trying to “build or construct a case, rather than to investigate the case independently and impartially”.

The preparation of witness statements had involved “coaching”, and there had been a failure on the part of the ODCE to seek out evidence in support of innocence as well as guilt.

He referred to internal ODCE documents indicating that particular questions should not be put to the auditors lest the answers might be “unhelpful” to the case being made by the agency.

The trial heard evidence that some of the material in both witness statements was actually written by the then director of corporate enforcement Paul Appleby.

The trial involved 27 charges and a lot of rather dry detail. However, one aspect of the case could be seen as illustrative of an unfair effort to “get” FitzPatrick.

While the nation was widely shocked to hear about the warehousing of loans by the former Anglo chairman in 2008, it quickly emerged that this was not necessarily illegal. Each year-end company directors are obliged to declare any loans they had from their company during the year. However, bank directors during the 2000s had a different obligation. They had to declare only loans they had at the year’s end.

The Anglo directors, including FitzPatrick, were asked by the bank’s auditors EY to sign documents setting out their loans from the bank.

However, the directors were mistakenly given documents using a template appropriate for “normal” company directors rather than bank directors. So they ended up signing documents that referred to loans during the year rather than at year-end.

The prosecution case against FitzPatrick included charges that he had misrepresented his position to the auditors in relation to his loans when he had signed these documents. Yet this was only because he was given the wrong type of document to sign, one that referred to loans during the year, rather than at year’s-end.

According to Judge Aylmer, the use by the auditors of the wrong template was regarded by the ODCE as “fortuitous in the context of their endeavours to build a case of misrepresentation”.

The “coached” statements from the auditors did not clear up the fact that the auditors were not interested in knowing what the Anglo directors loans were during the year, only at year-end.

It was only when they were in the witness box being cross-examined that this emerged. The judge described this state of affairs as “most alarming”.

While the shortcomings of O’Connell’s work were centre stage during the trial, there was also evidence showing that officials in the DPP’s office, officials elsewhere in the ODCE, and members of An Garda Síochána, were aware of what was happening, or should have been, well before the 2015 trial got under way.

The issue now to be addressed is a serious one. How could a biased and partisan criminal investigation, leading to not one attempt but two to convict a citizen through the courts, have occurred?

The defendant in the case was often portrayed as a key contributor to Ireland’s banking collapse. However, this does not excuse vital State agencies, working in a charged atmosphere and being scrutinised by politicians, from making fundamental errors while dealing with the liberty of a citizen.