Man claims he was subjected to homophobic incidents at former school 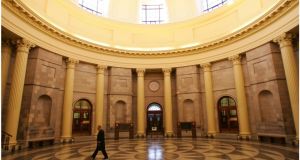 A retired teacher has settled a High Court action for damages over claims he was subjected to alleged bullying. Photograph: Bryan O’Brien/The Irish Times

A retired teacher has settled a High Court action for damages over claims he was subjected to alleged bullying - including homophobic incidents - while employed by a Vocational Education Committee (VEC).

Pearse Brannigan (55), who is gay, claimed a classroom door was graffitied with the words “Brannigan is a queer and bastard” in one incident in St Laurence’s Community College, Drogheda, where he worked for 18 years as an employee of Co Louth VEC.

He said Co Louth VEC failed to deal with the alleged bullying or provide support to him as he was vulnerable due to hospitalisation for an alcohol problem and by virtue of his sexual orientation. The claims were denied by the VEC.

His action for damages was due to begin today before High Court president Mr Justice Nicholas Kearns who was told, following talks, that the case had been settled and could be struck out with an order for Mr Brannigan’s legal costs.

In his action, it was claimed Mr Brannigan, who was employed between 1981 and 2003 at St Laurence’s, had an alcohol problem in 1998 when he voluntarily entered hospital for treatment and was discharged after two weeks and gave up drinking.

When he returned to his teaching post in 1999, a class of third year students presented a letter to the then principal, Michael Dowd, complaining that from February to April he had taught them nothing but grammar.

He claimed that Mr Dowd and the school vice-principal, Teresa Stack, had a meeting with the class involved and that he was also not shown the letter the students had written.

This led to a number of incidents which started with students verbally abusing him when he returned to teaching them. Stones were also thrown at him in the classroom, he claimed.

When he complained to the principal, the students were not reprimanded and the verbal abuse continued and spread on to the street, it was claimed. He also claimed he was thumped on the chest by one of his students who was not adequately reprimanded.

He said the principal, Mr Dowd, once referred to him as “honky tonks” in the presence of other staff members sometime in 1997.

When Mr Brannigan called with his (Brannigan’s) long-term partner to the school in October 1998, Mr Dowd allegedly told him he should “not defecate on his own doorstep”, he claimed.

As a consequence of the approach adopted by Mr Dowd and his vice-principal, Ms Stack, he said the class who had complained about him showed a total lack of respect for him.

Apart from the graffiti on the door incident, two students threatened him with violence and received a one week suspension, he said.

He claimed that when he complained about the banana in a condom incident to the principal of the Institute of Further Education, Eugene Winters, he was told by Mr Winters he was too busy with more important issues.

He claimed his time-table in the institute was used in a manner to victimise him in relation to a solicitor’s letter he had sent previously.

When he complained he was the victim of homophobia and bullying, the principal of the institute refused to discuss the matter with him, it was also claimed.