Garda trauma: Sean was a garda for six weeks when he saw his first body

Serving and retired gardaí describe the ordeal of dealing with crashes, suicides and violent crimes 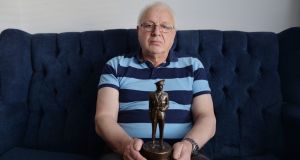 William Horgan, retired garda, at his home in Dundalk. He recalls a car accident in the early 1990s involving a family car and a cattle truck. “The entire family was wiped out. Even talking about it now is difficult enough.” Photograph: Alan Betson

Sean* was only six weeks qualified as a garda when he saw his first body. A woman had been found murdered in her house in south Dublin city and it was his job to “preserve the scene”.

Garda regulations state a body found in suspicious circumstances cannot be left alone even for a second until a postmortem. This meant the young garda staying in the house for much of the night, alone with the remains.

8 Covid-19: Mandatory hotel quarantine system could be running in a week

10 Ken Early: Klopp all at sea as Liverpool continue to flounder

16 Do young people really need to go back into the office?

18 ‘Do I have to do everything around here?’ Irish women and the ‘invisible job’

19 Nicola Coughlan: Women used to have to be sweet. Now we can be obnoxious eejits – thank God

23 Benefits of sport far outweigh the Covid risks so why are kids still not playing?

26 Colin Farrell: ‘After 20 years of drinking the way I drank, the sober world is pretty scary’

29 Up to 600 doctors may leave Irish health system in July, IMO warns

32 International Women’s Day: No more excuses on gender and power

39 Eirgrid proposals to include €2bn power line around Irish coast