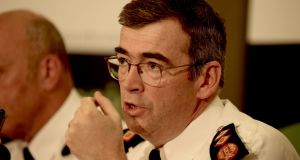 Garda spending exceeded projections by €32 million at the end of August this year, Garda Commissioner Drew Harris has told the Policing Authority.

As a result several cost-cutting measures have been introduced, including an almost complete ban on overtime. The Garda is usually given extra funding around this time of year to provide for budget overruns, however this will not happen in 2019.

“It has been necessary to identify a range of capital and current expenditure adjustments to year end,” Mr Harris told the authority in his monthly report.

The overall net expenditure by the end of August stood at just under €1.1 billion, €2.4 million more than the expected spend for that date. When certain savings were excluded, this overspend stood at €32 million, he said.

Spending on overtime was halted in late September with divisional management informed exceptions could only be made in specific circumstances such as for major criminal investigations.

“There are currently two distinct trends observable in national crime figures. Crimes affecting property are on a downward trend, whilst crimes against the person, sexual offences and public order offences are showing an upward trend.”

These trends are being closely analysed by gardaí, he said. “This feeds directly into planning operational activities aimed at reducing and preventing crime.”

“Crimes against the person” increased by 7 per cent in the previous 12 months, a rise driven primarily by an increase in assaults.

Sexual offending has increased by more than 10 per cent, year on year. The report states this rise is being seen across Europe. It may be linked to victims being increasingly likely to report sex crimes, it said.

“However, given that crimes against the person is also on an upward trend, it cannot be precluded that there has been an increase in the number of sexual crimes occurring.”

The report also outlined major policing operations that took place in August, including anti-drugs policing at the Electric Picnic festival in Co Laois which led to the arrest of 15 people for drug dealing. Gardaí at the event also recorded nearly 500 instances of drug possession.

It also detailed the attempted robbery of an AIB bank on Douglas Road in Cork on August 21st, 2019 by a man armed with a fake gun. The man left the premises after the staff refused to hand over any money.

He returned a short time later with a petrol can, a gas canister, a lighter and a cleaver knife only to be arrested by Garda crime scene investigators who were examining the bank premises.

A follow-up search of his home reveal a crossbow, a machete and several cannabis plants. A man remains in custody.