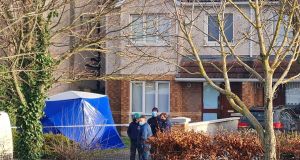 The Armed Support Unit was called to the scene after reports that a man involved in a standoff with gardaí was armed with a knife. Photograph: The Irish Times

Garda Ombudsman investigators are to examine a video capturing the fatal Garda shooting of a man in his front garden in west Dublin on Wednesday.

A man in his twenties was shot at least three times by members of the Blanchardstown Armed Support Unit (ASU) while allegedly brandishing a knife and threatening gardaí.

A 13 second mobile phone video shot by a passer-by, and confirmed by The Irish Times, shows a man in a blue jumper surrounded by ASU members on Manorfields Drive in Clonee.

A gunshot can be heard before the man in blue is seen swinging his arm towards the officers. It is not clear if there is something in his hand.

Another four shots are then heard. The man appears to stumble before falling to the ground on the fifth shot.

Sources say the shots all came from an official Garda weapon. At least three hit the man. ASU members administered first aid before Dublin Fire Brigade paramedics arrived and began CPR. The man was taken by ambulance to James Connolly Memorial Hospital where he was pronounced dead a short time later.

A State postmortem will be carried out on Thursday.

The Garda said in a statement it implemented a “a graduated policing response” after being threatened with a knife. It is understood this involved the use of pepper spray followed by the firing of two Taser guns.

The incident began just after midday when, according to eyewitnesses, the man entered the Eurospar supermarket in Hartstown were he punched a manager in the face, injuring the victim’s nose. He then produced a large knife from his pocket and brandished it towards staff.

The man then walked into the post office section of the supermarket as unarmed Gardaí began to arrive. The supermarket manager was taken to hospital for treatment.

At least 12 unarmed gardaí followed the man out of the shop and through several housing estates, while instructing him to drop the knife.

By 12.30pm, the ASU had arrived from Blanchardstown Garda Station and took over the operation. This is when the fatal shots were fired.

The deceased and his family had been living in the area for many years. Some family members were in the house at the time. They have since been relocated to a friend’s house.

Gardaí have obtained the video of the shooting which will be passed onto investigators from the Garda Ombudsman Commission (Gsoc).

Gsoc is obliged by law to carry out an inquiry into any fatal incident involving a garda. Its investigation is likely to focus on whether the use of force was proportionate to the threat and if gardaí engaged in the correct tactics to attempt to de-escalate the situation.

A source familiar with Garda firearms response said Tasers can be ineffective if a person is wearing thick clothing. Pepper spray may also not work if a suspect is in a highly agitated state, they said.

Local people who knew the man gathered at the Garda cordon on Wednesday afternoon, including some who expressed anger at the Garda response.

One woman said the man suffered from mental health issues. Another woman, who said she knew the deceased’s family, shouted at gardaí that they could have disabled the dead man by firing at his legs.

“At approximately 12.15pm, today Wednesday 30th December 2020, Gardaí responded to reports of a public order incident at a business premises in Hartstown,” the Garda said in a statement.

“Reports were that a male, in his late twenties, armed with a knife was at the scene.

“Members of the Armed Support Unit arrived at a scene in Manorfields Drive, Dublin 15.

“The Armed Support Unit were also threatened with a knife and implemented a graduated policing response where the use of less-than-lethal force options was initially administered in an effort to resolve the incident. The less-than-lethal use of force options were unsuccessful, and a number of shots were discharged from an official Garda firearm at approximately 12.35pm.

“The male was treated at the scene by Armed Support Unit paramedics, Dublin Fire Brigade paramedics. He was transferred to Connolly Hospital Blanchardstown, where he has pronounced dead this afternoon.

“The Garda Síochána Ombudsman Commission have been notified of the incident and are currently in attendance at the scene.”

An Garda Síochána are appealing to anyone who was in the Eurospar, post office or general vicinity of Hartstown Shopping Centre at approximately 12.15pm on Wednesday; anyone who was in the vicinity of Cherryfield and Manorsfield Estates, Dublin 15 between noon and 12.35pm ; or anyone with CCTV or other video footage of the incidents to contact them at Blanchardstown Garda Station 01-666 7000, or on the Garda confidential line 1800 666 111.