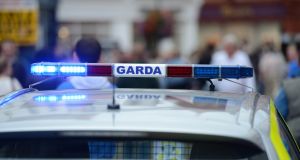 Gardaí in Munster are searching for a criminal gang who rammed a garda car leaving an officer injured in Waterford on Tuesday night.

The garda, who is in his 30s, suffered non-life-threatening injuries in the collision which happened between Cappoquin and Dungarvan in west Waterford at around 9pm.

The garda had been trying to stop the gang following a burglary in north Cork.

According to a garda source, the officer, who is stationed in Cappoquin but is originally from Rathcormac in Cork, was taken to Cork University Hospital for tests.

It is understood that the garda was not seriously injured but was kept in hospital overnight as a precautionary measure and is due to undergo a CT scan for possible neck injuries.

The incident happened after a travelling criminal gang - believed to be from Clondalkin in Dublin - were spotted leaving a house on College Street in Fermoy in Cork following a burglary.

Gardaí in Fermoy obtained a good description of the gang’s car and circulated it nationally in the belief that the gang would use the vehicle to try and get back to Dublin.

The injured garda was on patrol on his own when he spotted the suspect vehicle between Cappoquin and Dungarvan and he attempted to stop the car when it rammed him.

The gang’s car was damaged in the collision but they managed to make their getaway and gardaí believe they are the same gang who carried out a series of burglaries in Tipperary last week.