Garda in crisis: First glimpse of Life After Nóirín 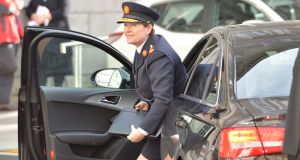 Tensions rose in An Garda Síochána this week, more so maybe than during many of the so-called big weeks of recent years. Stormy weather has been battering the force for the longest time now.

The initial controversy, identified by Garda whistleblower Sgt Maurice McCabe over the termination of motoring penalty points, looks almost quaint now in the context of everything that has since emerged.

It’s a fluffy little controversy in the line-up of debacles now circling the Garda.

Gardaí cancelling penalty points for no good reason looks almost like an ingenious idea to build community relations given some of the other things we now know were going on in the force at the time.

The wrongful conviction of almost 15,000 motorists, for example, was merely a supplementary problem that fell out when 1.4 million fake breath tests were taken out of the bag and put on the table back in March. Since then a labyrinthine system of financial governance and/or misgovernance at the Garda College, Templemore, has emerged to embarrass the force.

Amid ropey assurances from Garda Headquarters that everything is fine, the rate of reform in the force is stumbling along. Its architect and biggest champion, former Garda commissioner Nóirín O’Sullivan, has stepped down.

What might happen now that she has gone began to take shape over the past week.

The first real glimpse of what Life After Nóirín looks like was offered up by the Commission on the Future of Policing in Ireland on Tuesday. Its chairwoman Kathleen O’Toole had written a letter of advice to Minister for Justice Charlie Flanagan dated last Friday and which he said he received on Monday.

The commission advised Flanagan and his Government colleagues not to even begin the process of finding a replacement for O’Sullivan. It said the changes needed for the force were so significant it was impossible to even formulate a job description for the commissioner’s post. In the absence of knowing what the Garda would look like after the execution of big changes now so badly needed, no credible candidates would come forward.

It said the Government should not even begin the process of finding a new Garda commissioner until it had reported in 12 months’ time.

The Policing Authority is charged with formulating the new process under which the commissioner will be recruited. Its head, Josephine Feehily, said this week she was “troubled” by the idea of the “lacuna” now being suggested by the commission. She said if the Government decided to wait 12 months, it would take another couple of months after that before a job description and recruitment process could be devised. A further six months would be required to actually run the recruitment process.

If the commission’s advice is followed there will be a wait of some 21 months before O’Sullivan’s successor is found. If the Government allows itself time to consider the commission’s recommendations, another six months could easily slip by.

In that case it could be early 2020 before a new commissioner was in office, some 2¼ years after O’Sullivan’s departure.

In her letter, O’Toole told Flanagan “very significant” changes that would require legislation were needed for the Garda. These would “significantly effect” the role and responsibilities of the next commissioner and the wider management structure of the Garda.

Speaking to The Irish Times, senior Garda officers speculated that this could mean breaking up the force; some wondered whether the security function would be taken out of the Garda and become a standalone agency, as it is in many other countries.

Other officers wondered if any breaking up of the Garda might go even further than the creation of a security agency. With much of the recent controversies having sprung from roads policing, some suggested a transport police might be created.

But others, including those in the Department of Justice, were not so sure that Life After Nóirín would involve such huge changes.

They accepted pressure to look outside the force for the next commissioner was greater than ever. They also said if the Garda was broken up and the State security function taken out, it would be easier to hire a foreign candidate. It would mean a foreign commissioner who would not be involved in State security; a proposal anathema to most in the Irish security community.

“It’s not going to happen,” said one source of the force being split and a new State security agency being devised. “You have to ask yourself does the Government want to do that. And does the Garda want to do it. And the answer to those questions is definitely ‘no’.” However, the source agreed that Taoiseach Leo Varadkar might over-rule them regarding a split and seek to fill the vacancy from abroad.

Another source said that when the time arrived for a decision to be made, the Garda would, on security grounds, advise the Government against making an independent entity of the Garda’s State security function.

“Is a Cabinet, not one of them with any policing experience, really going to reject the advice of the Garda on an issue like State security?

“There’s no doubt the guards are in deep trouble and huge reform is needed. But they’ve been excellent in fighting terrorism down the years. Are politicians going to reject state security advice from an organisation with such a strong State security record? One wouldn’t have thought so,” the source said.

Another source, with an intimate knowledge of many facets of Irish justice, believed not only would the Garda not be broken up, but that the next commissioner would very likely come from within the organisation. He believed O’Toole’s intervention this week was very significant in shaping Life After Nóirín and the long-term future of the Garda.

“Right now the pressure to look outside [the Garda] for the next commissioner is huge. But what if it’s all put on hold for 12 months like Kathleen O’Toole has said?

“Then everything can calm down, the pressure can come off. And if the commission recommends lots of changes for the Garda, the Government can commit to implementing them but stop short of breaking it up or hiring somebody from abroad to run it.

“That wouldn’t be acceptable right now, but an awful lot can happen in 12 months.”

A senior Garda source said the Department of Justice was “just as conservative” as the force in resisting reform. Ultimately neither want to break up the Garda or hire an outside candidate to be the next commissioner.

“They might skip a generation,” he said. “Keep an eye on guys that are senior but whose faces and names are not as well known as the people who’ve just left the organisation.”

He mentioned the names of John O’Driscoll, Eugene Corcoran and, especially, Pat Leahy – all assistant commissioners.

Acting Garda Commissioner Dónall Ó Cualáin, who will run the Garda until a commissioner is found, has ruled himself out. Deputy Commissioner John Twomey would under normal circumstances be the hot favourite if there was not such a mood for change.

A senior Government source said the timing of Ms O’Toole’s correspondence and the fact that a letter to a Minister was published by her agency 24 hours after Flanagan said he received it was “no coincidence”.

“You have to remember Kathleen O’Toole has a long relationship with Government here,” said the source.

“She was the head of the Garda Inspectorate in the past. And the fact she’s back shows you the relationship is good. She is not about to get aggressive with the Government .

“Her advice actually buys a lot of time for the Government. It’s an excuse for them to slow it all down.”

Another source suggested her advice could be useful in other ways.

“She’s saying to wait for a year before you start to look for a new commissioner. And then when the Commission on the Future of Policing in Ireland does its report, you might be looking at another year for the reforms in it to be put in place.”

The same source said that after the Morris Tribunal [into the Donegal Garda division] began to report, delays arose with the creation and commencement of the agencies that sprang from its findings, the Garda Inspectorate and Garda Síochána Ombudsman Commission (Gsoc).

“So maybe now you need two years before you hire the next commissioner. Could you hire somebody on a two-year contract to lead the guards? A civilian with a really good background in change management?

“You could sell that as a once-off arrangement to drive reform and then you could go back to having a commissioner from inside the organisation.

“That would be just about acceptable to everyone and it would solve a lot of the issues with the delay that’s now inevitably going to happen with replacing Nóirín O’Sullivan.

“I could see that two-year contract commissioner happening, you could actually picture that.”