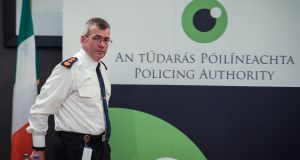 Garda Commissioner Drew Harris has said he feels no need to clarify remarks he made last week about the IRA and Sinn Féin, adding he stood over the comments.

Speaking after a hearing in Dublin of the Policing Authority on Wednesday, Mr Harris was asked by reporters about the comments he made at a passing out ceremony of 200 new gardaí at the Garda College, Templemore, Co Tipperary.

Mr Harris was asked at the event last Friday if he agreed with the view by the PSNI that the Provisional Army Council still oversaw both the IRA and Sinn Féin. The commissioner replied that the Garda shared that view.

Asked on Wednesday if he wanted to clarify his comments or if they amounted to political interference, Mr Harris said his position and the view of An Garda Síochána had not changed since last Friday.

“I never engage in political interference and my comments require no clarification or amplification,” he said.

Asked if he stood over his remarks, he said: “As I say, my comments require no clarification so that’s obvious that I stand over those comments and I have no regrets about them.

“I’ve no intention to further amplify or clarify those comments. I think as Garda Commissioner I did provide the position of An Garda Síochána.”

The Irish Times reported last Friday that the PSNI had reiterated its findings on the IRA and Sinn Féin which were contained in a 2015 report on paramilitary groups in Ireland.

On the section dealing with the IRA, the 2015 report stated that the Provisional Army Council continued to oversee both the IRA and Sinn Féin. The PSNI last week reiterated that view in reply to queries from The Irish Times.

When asked about this in Templemore, Mr Harris said the Garda’s analysis was the same as the PSNI’s.

“I am aware of the PSNI and British security service’s assessment and we do not differ from that view,” said Mr Harris last Friday.

However, Mr Harris added that he was a public servant and he would work with whatever parties formed the next government, of which Sinn Féin wants to be part.

Sinn Féin leader Mary Lou McDonald last week responded to Mr Harris’s remarks saying “the war is over and the IRA is off the stage”.

She added: “The reality is that we now live in a peaceful dispensation... the IRA has gone away and democracy is the order of the day and there’s no dispute around that.”

“I know Drew Harris has said he will work with any party with a democratic mandate and that’s exactly as it should be.”

During the Policing Authority meeting in Dublin Castle on Wednesday, Mr Harris said it was hard to say how many cases of alleged corruption the new Garda Anti Corruption Unit would investigate each year.

Mr Harris said it appeared to him that a much lower number of reports of alleged misconduct were coming to light each year within the Garda compared to police forces of a similar size in other jurisdictions.

However, he said as well as investigating allegations of corruption the new unit would also seek to deter and prevent corruption. In some cases corruption related to theft of data while others involved sexual misconduct or the abuse of intoxicating substances.

Mr Harris was in favour of random drug testing, saying he believed it was appropriate and that plans were being made to introduce it for Garda members.

1 Coronavirus: Surge in cases hits Ireland's nursing homes as number of clusters jumps to 38
2 Ireland has strategy to ‘break the chains’ of coronavirus - WHO’s Mike Ryan
3 We need to cancel the Leaving Cert and give students predicted grades
4 Coronavirus: Warning over rate of growth as 13 more die in Republic
5 Coronavirus: Residents of Wuhan told to stay inside and be vigilant
Real news has value SUBSCRIBE