Gardaí will not carry out checks on Border in event of no-deal, says Flanagan 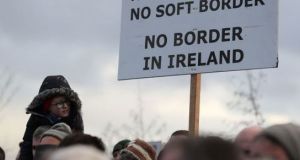 Minister for Justice Charlie Flanagan said he did not “envisage” gardaí would be involved in any Border checks nor did he want to see “any return to the tightly patrolled, highly armed” Border presence of the 1970s, 1980s and 1990s. File photograph: PA Wire

Gardaí will not be deployed to carry out checks along the Northern Irish border in the event of a no-deal Brexit, the Minister for Justice has said.

Speaking at Wednesday’s announcement of the department’s 2020 budgetary allocation, Charlie Flanagan said he did not “envisage” gardaí would be involved in any Border checks nor did he want to see “any return to the tightly patrolled, highly armed” Border presence of the 1970s, 1980s and 1990s. However, he noted that both he and Garda Commissioner Drew Harris remained “very conscious of the unique circumstances around any border” in terms of smuggling and organised crime.

“I have every confidence in the Garda commissioner to ensure that there will be adequately resourced gardaí within the border area,” he said. “The greatest threat to the security of this Sate remains dissident republicans and every effort is being made on behalf of police to make sure anyone engaged with dissident republican tyranny will be brought to justice.”

On the issue of policing numbers in the Republic, Mr Flanagan said funding from the department’s €2.98 billion budgetary allocation would be used in the recruitment of “up to 700” new gardaí along with additional Garda staff. He said the Government was on track to have an overall Garda workforce of 21,000 in place by 2012 including 15,000 Garda members and 4,000 civilian staff.

Some 800 gardaí were recruited in both 2017 and 2018 compared to 600 garda recruits and 200 civilian hires in 2019, said the Minister, adding that the Garda Commissioner required “flexibility” in creating a balance between gardaí and civil staff. This has been a key goal of Garda management in recent years, with the aim to increase the proportion of civilian employees to 20 per cent by 2021.

There are currently 14,200 gardaí in the force with that number expected to rise to 14,400 by the end of the year allowing for retirements, said Mr Flanagan.

The Garda budget for 2020 has been set at €1.88 billion and will also include spending on a targeted severance package for senior officers and provision for general public service pay increases.

Capital spending across An Garda Síochána is to increase by €24 million to €116.5 million next year with some of the money being used to relocate the Garda offices on Harcourt Street, Dublin to Military Road, to refurbish the male and female sections of Limerick Prison and to upgrade the Garda IT system.

The €190 million increase in the overall justice budget will include funding for the completion of a new Forensic Science Ireland lab in Co Kildare and the establishment of the Judicial Council. The minister said he was confident that the council, which aims to promote standards of conduct, education for judges, develop sentencing guidelines and improve public confidence in the judiciary, would be established by the end of 2019.

Asked to comment on the spend on the US presidential visits, Mr Flanagan said just under €12 million had been spent on the Donald Trump visit, including payments of €7.5 million for overtime, while the Mike Pence visit was expected to cost “something short of €3 million”.