Gardaí urged to dismiss personal, political or religious beliefs when in uniform 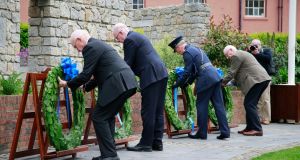 The political, cultural and religious beliefs of members of An Garda Síochána should always come second to their duties within the force, attendees at the annual memorial day for deceased gardaí have heard.

Speaking in the grounds of Dublin Castle on Saturday, Archdeacon of Dublin and Garda chaplain David Pierpoint reminded gardaí of their responsibility to leave aside any personal prejudices when upholding the rule of law and ensuring the protection of human rights.

All personal beliefs must remain with the member’s private life, said the archdeacon, adding that “when a member puts on the uniform of An Garda Síochána they are representing the State and the people, not their cultural or religious affiliations”. His comments came a month after new rules were introduced which allow female Muslim gardaí to wear headscarves and Sikh members to wear turbans.

Archdeacon Pierpoint paid tribute the force’s work to keep the peace, often in very difficult situations and “with limited resources”. He called on gardaí to always “adhere to the code of conduct and rule of law” in their work. “Unfortunately, as we’ve seen in recent times, that is not always the case. But to live by those rules and that code of conduct demands great courage.”

Garda Commissioner Drew Harris paid tribute to the gardaí who had lost their lives, describing their commitment to the force as “the definition of bravery”. Gardaí must sometimes put their lives on the line, “a heavy burden” for their families, he said. But they accept this burden because “it is what is required to protect our society and our democracy”.

When members dress in their Garda uniform they were wearing more than a piece of clothing, added the commissioner. “Just as the garda badge is not just a logo. These are symbols not only of authority, but also of justice, of fairness, of bravery, or community.”

The ceremony to remember the 88 members of the force who have been killed in the line of duty since the foundation of the State was held in Dubhlinn Gardens in Dublin Castle on Saturday morning and attended by hundreds of family members of An Garda Síochána.

The service was celebrated by the archdeacon and the force’s Catholic chaplain, Fr Joe Kennedy and attended by the Garda Commissioner, Deputy Garda Commissioner John Twomey and Minister for Justice Charlie Flanagan who laid wreaths with blue ribbons at the granite memorial to those killed in the force.

Mr Flanagan praised the men and women who “every single day put themselves in harm’s way in order that we may go about our lawful business and enjoy the right to live safely in our communities”. The Minister expressed his sympathies to the families who had lost loved ones in the line of duty and committed to supporting the work of An Garda and “ensuring the organisation is properly resourced to carry out its important role in protecting our communities”.

The service included prayers of the faithful read by Kayla Gill, the goddaughter of Garda Gary McLoughlin (24) and Sarah McCallion, goddaughter of Garda Robbie McCallion (29) who both died in the line of duty in 2009. Representatives from the State’s Sunni Muslim, Shia Muslim, Christian Orthodox, Hindu, Buddhist, Sikh, Baha’í and Pentecostal communities also read prayers at the event.