Gardaí urge public not to attend anti-lockdown protest in Cork 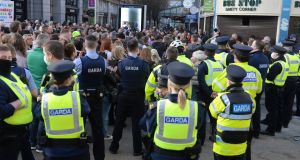 Gardaí in Dublin during an anti-lockdown protest last Saturday. National Garda resources have been made available for the protest in Cork in addition to local and divisional gardaí. Photograph: Dara Mac Dónaill

Gardaí have urged members of the public not to attend an anti-lockdown protest planned for Cork city centre on Saturday. They are also warning attendees that criminal proceedings or fines could arise for those who flout the current Level 5 Covid-19 restrictions.

A policing plan, which includes public order units, is in place for the protest, due to take place on the main thoroughfare of Patrick Street in the afternoon. National Garda resources have been made available for the rally in addition to local and divisional gardaí.

Garda sources said the violence that occurred at an anti-lockdown event in Dublin last weekend had informed the preparation of the policing plan for the Cork protest, though the organisers of the Cork event say they are not affiliated in any way with those behind last weekend’s Grafton Street protest.

Garda sources said no prediction was being made in the policing plans that the same number of people would turn up, or that violence would flare, adding that Garda members on duty would not assume a stance on the streets based on the assumption violence was inevitable.

“You obviously plan for any outcome and we will have resources there if they are needed,” said one source. “But it won’t be a case of going in there from the start with full public order gear or anything like that.”

Additional uniform gardaí will be on duty, with the public order unit on standby as well as Garda dogs and handlers. The Garda helicopter could also be deployed if required.

However, informed sources stressed the basis of the policing operation would be regular uniformed gardaí. They added the Garda checks in place nationwide to ensure people were not making non-essential journeys would be useful in tracking who was going to the event and if they had an essential reason for being in Cork.

A Garda spokesman said public order capability will be available as part of a graduated response and warned there was no excuse for members of the public to breach the 5km regulations to attend a rally of any type.

“Attending an event organised in breach of these regulations is not a reasonable excuse to travel outside your home.”

The spokesman said they have no role in permitting or authorising protest marches or gatherings, as there is no permit or authorisation required for such events.

However, where gardaí can “identify potential organisers of such events” they will “engage and advise those organisers as to the current public health regulations, their responsibilities and potential consequences”.

Meanwhile, lord mayor of Cork Joe Kavanagh has called on organisers to cancel the event. “This has been classed as a potential super-spreader event and has the potential to create a spike in the number of cases,” he said.

The Cork Business Association has also urged the public not to attend the rally. The head of the Cork Penny Dinners soup kitchen, Caitríona Twomey, has said that her “heart is breaking” at the idea of a rally serving as a super-spreader event.

However, a former councillor who is promoting the anti-lockdown rally said supporters of the protest feel tarnished by suggestions that their event will in any way resemble the violent scenes in Dublin last Saturday.

Diarmaid Ó Cadhla, secretary of the People’s Convention, said that they are expecting a “family friendly event” of some magnitude. He said it will not be marred by ugly scenes, which left three gardaí injured in a anti-lockdown protest in Dublin last week.

Mr Ó Cadhla, who says his grandchildren will attend the Cork protest, said they were not in any way affiliated with the Dublin event. He condemned all acts of violence.

“We take exception to some of the comments being made by other public representatives. People have implied that we are somehow affiliated with a far right clique or group.

“This group [the People’s Convention] has been involved over the past 12 or 13 years of its existence in the Cork area in countless public events including many protests. Never once was there a suggestion of trouble. And if there was we would be horrified. There will be no abuse of anybody tolerated.”