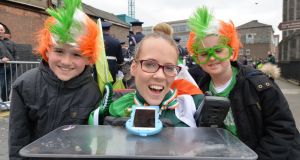 Gardaí have appealed to revellers not to “spoil” the holiday weekend by engaging in excessive drinking and anti-social behaviour.

Security arrangements will be ramped up across Dublin city centre on Friday when about 450,000 people are expected to attend the St Patrick’s Day parade beginning at 12pm.

Gardaí say there will be a “zero tolerance” approach to underage and on-street drinking and have urged members of the public to avail of public transport if they plan on drinking.

“Events in the city centre during the St Patrick’s festival are family-oriented and not to be spoilt by the actions of those who wish to ignore this advice,” a notice on the Garda website stated on Thursday.

Barrier controls operated by gardaí and Dublin City Council will again be imposed at access points to Temple Bar, where there will be an enhanced police presence to patrol for illegal drinking and anti-social behaviour.

The notice also advises patrons to be aware of their surroundings and belongings as pick-pockets often operate on the margins of large public gatherings.

People should avoid crossing the parade route where possible, however, where this is absolutely necessary gardaí will control some crossing points that should be adhered to by members of the public.

Those coming to view the parade on the east side of O’Connell Street are advised to access the spectator areas via the Rosie Hackett Bridge and Marlborough Street, and key vantage points along O’Connell Street and O’Connell Bridge are expected to be at capacity from early on Friday.

Rolling street closures will come into effect from Thursday in Dublin until up to 6pm on Friday, and these will primarily affect the areas around Parnell Square, O’Connell Street, Dame Street, Christchurch, Clanbrassil Street, Kevin Street and Stephen’s Green.