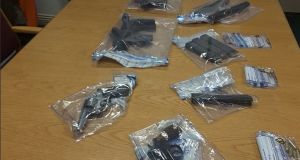 A range of weapons discovered and confiscated by gardaí. Photograph: An Garda Síochána

Gardaí believe they have foiled another murder in the Kinahan-Hutch gun feud after seizing five weapons and about 150 rounds of ammunition in Dublin.

The seizure was made in Cabra on the north side of the city on Saturday evening after a planned intelligence-led operation by members of the Garda Drugs and Organised Crime Bureau.

No arrests were made but gardaí interviewed several men they believe had sourced the firearms and were about to move them as part of an imminent attack on members of the Hutch family.

The haul seized included two MP9 sub machine guns with silencers for both and four detachable box magazines containing 30 rounds of ammunition each.

The guns are normally used by military and police special forces around the world.

The three handguns – one a .44 Magnun, another a .38 Smith & Wesson – were loaded and officers believe they had been prepared for an “imminent attack”.

The discovery was made when gardaí searched a car on Quarry Rd, Cabra, at about 5pm on Saturday.

The men interviewed by investigating officers remain of interest but were not arrested at the scene because the weapons must be linked to them before criminal charges could be pursued.

The suspects are from the north inner city, where the Hutch family and their associates live and have been under attack for over a year.

However, gardaí believe the men they interviewed were working for the gang headed by Christy Kinahan and which shot dead Dubliner Gary Hutch (34) in southern Spain in September of last year.

Since then the Kinahan gang has been embroiled in a feud with men close to Gary Hutch. The feud has resulted in 10 gun murders – one in Meath, two in Spain and seven in Dublin – and a series of attempted murders in Dublin.

Nine of the 10 murders have been perpetrated by the Kinahan gang.

Gardaí believe the guns seized on Saturday, which have been put on display for the media, were about to be used to attack a member of the Hutch family or their associates, probably on Saturday night.

One of the men interviewed is believed to have been wearing a bullet proof vest.

The guns will now undergo forensic examination in the hope DNA or fingerprints may link the suspects, or other criminals, to the firearms.

And the recent movements of the men interviewed will also be examined in a bid to uncover their associates.

But while those inquiries were still in the early stages gardaí are satisfied the men are linked to the Kinahan gang and that the guns were about to be used in an attack on the Hutch family and those they are linked to.