Body was discovered with gunshot wound in Swords on Sunday afternoon 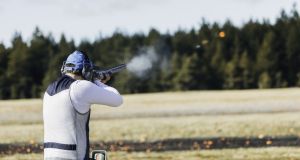 Gardaí said they were not seeking any other person in relation to the man’s death at the outdoor range. File photograph: Getty Images

A man has died in an apparent accidental shooting at a firing range in north Co Dublin.

Gardaí on Monday said they were treating the death as a “tragic incident” and no one else was being sought.

The victim was found dead, having suffered a gunshot wound, by another person who had arrived at the range in Swords on Sunday afternoon.

The emergency services were called and while paramedics arrived in a bid to treat the victim, he was pronounced dead at the scene.

“Gardaí are currently at scene at the discovery of a body at a shooting range in Balheary, Swords, Co Dublin, this afternoon approximately 3.30pm,” Garda Headquarters said in reply to queries on Sunday evening.

While the Garda did not comment on the circumstances in which the man sustained the fatal shot, investigating gardaí initially believed the man’s gun was accidentally discharged.

Gardaí were working on the theory that the man was fatally wounded when alone and that the incident was not noticed for some time.

The man’s remains had been removed from the scene late on Sunday night and a post mortem on his remains was expected to be completed on Monday.

A firearm was also being examined as part of the Garda inquiry.