Gardaí treating death of man (21) in Co Mayo as ‘homicide’ 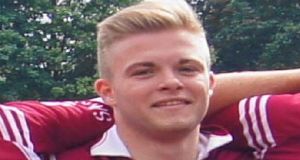 Joseph Deacy (21) from St Albans in Hertfordshire, England, was a member of St Colmcilles GAA club.

Gardaí are treating as homicide the death of a man who was found seriously injured outside a house where he was staying in Co Mayo.

The victim, Joseph Deacy (21) from St Albans in Hertfordshire, England, was staying in a house in the townland of Derrynasillagh, Swinford, just off the N5, while the owners, who are relatives, were away on holidays.

The deceased was out socialising last Friday night with a friend in Kiltimagh.

Mr Deacy, who was in Ireland for a two-week holiday, appears to have returned to the house where he was staying. Gardai believe he arrived back to the property, which is in a rural area, in the early hours of Saturday morning.

At around 6am a passerby spotted Mr Deacy outside the house in a collapsed state and visibly injured.

The family he was staying with was alerted and the emergency services were immediately called.

While he had sustained a trauma injury to the head, Mr Deacy was still alive when he was found.

Paramedics administered emergency treatment to him at the scene and he was then taken by ambulance to Mayo University Hospital.

He was later transferred to Beaumont Hospital, Dublin, which specialises in the treatment of head injuries.

However, he was pronounced dead at the hospital on Sunday evening.

His parents flew over from England and were with him when his life support system was turned off. It is understood his organs have been harvested for transplantation.

Gardaí were initially treating his death as an unexplained incident.

A postmortem on his remains by State Pathologist Prof Marie Cassidy concluded he had died of blunt force trauma to the head.

Gardaí believe that injury was inflicted on the dead man by a third party and a homicide investigation has now begun.

Gardai in Claremorris are investigating the killing of Mr Deacy and a liaison officer has been appointed to assist his family in the UK.

At a press briefing in Claremoris Garda Station on Tuesday evening, Supt Tony Healy said that a post mortem conducted by Prof Cassidy indicated the deceased had not died from natural causes.

He described the dead man as a frequent visitor to Mayo and said he had been due to return to the UK later this week.

He added that detectives were now trying to piece together the dead man’s movements and those he was with late on Friday and in to Saturday.

He also appealed to the public for information. “We are seeking information from members of the public as to any assault, row or altercation they might have witnessed on Friday night/Saturday morning”.

“We are are also looking for any CCTV, dashcam or mobile phone camera footage of any incident in which the deceased might have been involved”.

Locals in the Swinford and Kiltimagh areas are in shock over the death of a young man who visited the area frequently and was described as “likeable and friendly.”

Michael Smyth, a Swinford based Fianna Fáil councillor, said the death was a tragedy not alone for the family involved but the whole community.

“Our thoughts and prayers are with the family and other relatives at this terrible time”, he said.

He added that while he did not know th dead man personally he knew of him as an ardent GAA fan who travelled home regularly to support his native Mayo and was also hugelly interested in the fortunes of the Irish soccer team.