Gardaí treating death of boy (3) as a personal tragedy 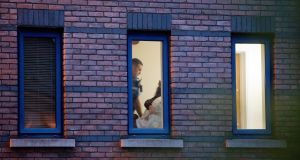 A Garda in the Riverside apartment block on Poddle Park in Kimmage: the small three-storey complex is tucked into a residential road beside a small parkPhotograph: Tom Honan 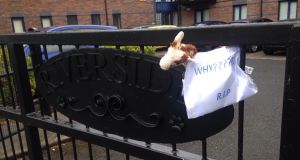 A teddy and a message left on the gate of the Riverside apartments in Kimmage on Tuesday morning where a boy (3) was fatally stabbed and a woman in her 40s sustained severe stab wounds. Photograph: Sarah Burns/The Irish Times 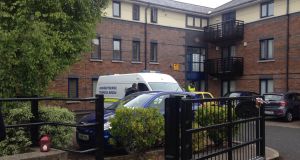 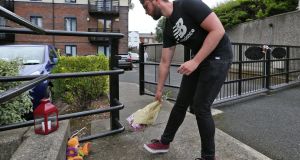 A man places flowers at the scene on Tuesday morning at the Riverside apartment complex in Kimmage where the body of a three year old child was discovered last night. Photograph: Collins 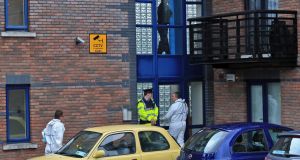 Gardaí at the scene this morning at the Riverside apartment complex. Photograph: Collins

Gardaí have said they are treating the death of a three-old-boy in south Dublin as a personal tragedy.

Gardaí are waiting to interview the mother of the child who remains in a serious condition at St James’s Hospital.

She was taken there with stab wounds on Monday night after emergency services called to the home she shared with her three-year-old son in Kimmage around 7pm. The woman, in her 40s, is understood to be Iranian. She underwent emergency surgery overnight.

Sources said there was no sign of a break-in at the apartment or of a violent struggle.

Gardaí have said they are not looking for anyone else in relation to the child’s death at the Riverside apartment block at Poddle Park in Kimmage.

They believe they have identified the weapon, understood to be a kitchen knife, used in the stabbing.

The boy, who had suffered knife wounds, was pronounced dead at the scene. His body was removed from the apartment complex on Tuesday morning for a post-mortem examination.

Members of the Garda Technical Bureau attended the scene on Tuesday morning as local residents placed flowers, balloons, cuddly toys and candles at the scene.

“It’s absolutely unbelievable, I’ve a three-year-old grandson myself and your heart has to go out to his family members”.

“He’s going to be missed in the community. Crumlin and Kimmage would be a strong community-based area, the people are the salt of the earth up there and you can see that with all tributes they’ve left. The community are really coming together.”

It is understood the woman had been living with her child at the apartment block for the last two to three years. It is believed she separated from the child’s father in the last year.

Lorraine Leon, who lives opposite the apartment block, described the toddler as “beautiful” and “chatty”.

Speaking about the boy’s mother she said: “She loved it here, was settled, didn’t talk about going back at all. She was totally settled, she had her friends and mixed in the community. She was great”.

Ms Leon said the woman had one child who was “her world - that’s what she called him”.

Investigating gardaí have appealed for witnesses to come forward. They urged anyone who was in the area of Poddle Park between 5pm on Sunday and 7pm on Monday to contact them at Crumlin Garda Station.