Gardaí appeal for information about incident at Intreo office on Hanover Street, Cork 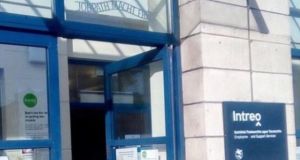 The sticker appeared to be specially made for the Intreo office. Photograph: Irish Polish Society/ Facebook

The placing of words from the Nazi concentration camp slogan “work sets you free” over the door of a social welfare office in Cork is now being treated as “a potential incitement of hatred incident”, gardaí have said.

A stencil or sticker of the words “Jobpath Macht Frei”, mocking a slogan at the entrance to the Nazi concentration and extermination camp Auschwitz and others, was spotted and taken down on Wednesday.

A picture of the slogan emblazoned above the entrance door to the Intreo office on the city’s Hanover Street was widely shared online.

The Department of Employment Affairs and Social Protection confirmed “an extremely offensive sign had been placed on the outside of its office in Hanover Street, Cork by unknown persons” on Wednesday and was removed immediately it was reported to staff.

Auschwitz Memorial and Museum described it as “painful” to see, asking for it to be removed immediately.

“Arbeit macht frei was a false, cynical illusion the SS gave to prisoners of the Auschwitz camp. Those words became one of the icons of human hatred hate,” it said.

The matter was referred to the Garda which has now said a criminal inquiry had begun and appeal for public assistance.

“Gardaí are appealing for information in relation to a potential incitement of hatred incident at a Social Welfare Office on Hannover Street, Cork,” it said.

“The incident was reported after a member of the public noticed an offensive sticker that was placed at the entrance to the building.”

The Garda statement added while no arrests had been made the investigation was ongoing and it was committed to identifying and investigating hate crimes.

The sticker appeared to be specially made for the Jobpath office; a service that helps long-term unemployed people back to work. It mirrored the shape and positioning as the slogan that was placed over the gates of Auschwitz.