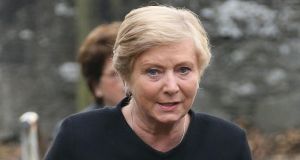 Minister for Justice Frances Fitzgerald has come under pressure on the issue of rural crime. Photograph: Colin Keegan/ Collins Dublin

Senior gardaí are to hold meetings with local chambers of commerce around the State to discuss a strategy on how to combat crime against businesses in rural areas.

Minister for Justice Frances Fitzgerald has come under pressure from Fine Gael TDs on the issue of rural crime, with calls for CCTV cameras to be installed in towns.

While much of the focus has been on raids on farms and isolated dwellings, Chambers Ireland spokesman Mark O’Mahoney said rural businesses were also being targeted.

“The gardaí are being fairly proactive and they are willing to engage with business communities and chambers of commerce,” said Mr O’Mahoney. “It was decided today that there will be meetings between superintendents and local business communities to try to get some type of co-operation going, ” he said.

“It’s going to have to be a concerted community effort with the gardaí, residents, businesses and the wider community,” he said.

“That is a model that is going to have to be developed.”

Mr O’Mahoney said crime directed at rural businesses was a “massive concern” and that the provision of CCTV would be “a very effective deterrent”.

“It has been shown to work in the past,” he said.

“The problem is finding the funding for it. It does seem to be a very effective deterrent and I know a lot of our chambers have been involved in supporting local authorities in developing town centre CCTV systems and have seen great results.”

A spokesman for the Garda said the force “can never overemphasise the importance of partnership between the Garda and the community in preventing and detecting crime, and maintaining a safe environment for everyone”.

“People have had their premises and businesses broken into a number of times,” he said. “It’s impacted significantly on businesses.”