Gardaí to investigate alleged attack on detective at GAA match 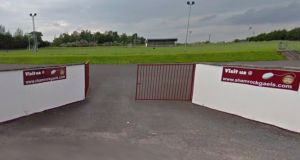 The Garda and the GAA are investigating an alleged assault on an off-duty detective as he tried to protect a referee at an underage football match in Co Sligo.

Det Chris O’Neill was reportedly kicked in the head while on the ground after he went to the assistance of the official, who was being verbally abused at the end of a minor match last Friday at Coola.

While the referee escaped injury, the officer is understood to have been struck at least once and reportedly lost consciousness briefly.

The Ballymote-based garda is secretary of the Shamrock Gaels club which had just been beaten by rival club Owenmore Gaels when violence broke out.

Last night Owenmore Gaels alleged one of its club members had also been assaulted in the aftermath of the game, and a complaint had been made to gardaí.

“The gardaí and Sligo county board are looking into the matter and we are awaiting the outcome of their investigations,” Owenmore Gaels said. “We reiterate our condemnation of the events that unfolded.”

Sligo county board chairman Gerry O’Connor said yesterday the incident was “completely unacceptable” and very much contrary to the “give respect – get respect” ethos of the GAA.

He said the referee would be required to provide a detailed report which would be investigated by the board’s competitions control committee.

One of Sligo’s best-known footballers, former county player Eamonn O’Hara, said the county board would need to be “very, very transparent” in dealing with the matter.

He said the board would have to carry out a thorough investigation and then furnish a report detailing its response and explaining how it would deal with this issue in the future.

The RTÉ pundit told Ocean FM it was becoming more common for supporters who come to games to “hurl abuse” at referees and at players .

A Garda spokesman said all the circumstances were being investigated. He said no one had been charged to date in connection with the incident.