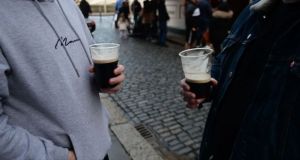 Gardaí are told to take no action against people if they comply with directions to disperse. Photograph: Alan Betson

Gardaí are set to mount heightened checks and patrols in public places associated with on-street drinking during the pandemic after the scenes witnessed at two locations, in Dublin and Cork, last weekend.

However, gardaí have been told to take a “proportionate” response and to take no action against people gathering to consume alcohol on the streets if they comply with directions to disperse. Garda Headquarters, Phoenix Park, Dublin, said there would be additional patrols by gardaí on foot, mountain bikes and in Garda vehicles from this weekend as well as the usual range of checkpoints aimed at deterring people from making non-essential journeys.

The Garda has also revealed there have been 45 breaches in the last three weeks of the regulations put in place to combat Covid-19 including, among others, eight by licensed premises, 28 by retailers and one breach relating to face coverings.

To date in the pandemic, some 493 cases have resulted in files sent to the DPP. Garda sources said that as part of the new focus on those locations where street drinking had occurred, South William St and the general area around it would be monitored. A similar focus would be centred on the junction of Grand Parade and the South Mall in Cork City where a crowd gathered last weekend to drink.

However, Garda sources said other locations – including beaches in south Co Dublin – would also be monitored as groups had been gathering in places other than those highlighted in the recent videos. Deputy Commissioner John Twomey, who is in charge of policing and security in the Garda, said — despite the emergence of the videos recorded in Cork and Dublin last week — people had generally followed the Covid-19 regulations without incident.

“While it has been disappointing at times to witness some activities by small numbers of individuals and groups, I am encouraged by the overwhelming support and compliance being demonstrated right throughout our communities supporting Covid-19 public health guidelines,” he said.

The Government came under intense pressure this week after videos emerged on Twitter last weekend showing crowds gather on streets in Cork and Dublin drinking, even though the Republic is currently in Level 5 of the Living with Covid-19 plan. In response to the videos Taoiseach Micheál Martin said steps would be taken to ban takeaway pints being sold from pubs. That proposal was then watered down to fines for those who gathered on streets to drink.

However, the mooted new rules were dropped on Tuesday, when they were set to be taken before Cabinet by Minister for Health Stephen Donnelly. Senior Garda sources told The Irish Times the Government had not consulted with Garda Headquarters, Phoenix Park, Dublin, about the proposals.

The sources said senior Garda management believed the force already had enough powers. Gardaí did not want new powers and a new system of fines that would not even be bedded in by the time they expired in less than two weeks when Level 5 lockdown was due to end.

Gardaí have the power to ask people to move on and people could be prosecuted for failure to comply with a Garda direction or for consuming alcohol in a public place.

However, Garda sources said those laws and bylaws were long-standing and that nothing in the Covid-19 regulations specifically banned group drinking on the street while takeaway pints were also not banned under liquor licensing laws.

Gardaí believe the enforcement options already available to them were sufficient for what they said were exception examples of crowds gathering on streets to drink during the lockdown period.

A statement from Garda Headquarters pointed out that its approach during the pandemic had always been to engage with people, explain the rules and public health advice and then encourage them to comply.

It was only as a last resort that enforcement was used and this approach would not change. “An Garda Síochána has lawful authority under various legislation to direct a person to desist from a particular course of action, without resorting to initiating a prosecution,” it said.

Director of calculated grades office rejects claims about criticism of data exclusion 17:54
Nphet tells Government to keep restaurants and pubs closed over Christmas 17:51
High Court president meets HSE to ensure best services for wards of court 17:45
Up to 2,000 cancers may be ‘lost’ because of Covid disruption 17:41
Man accused of assault on Kevin Lunney alleges DNA was ‘planted’ on van 17:34