Gardaí to be issued with masks for checkpoints and foot patrols 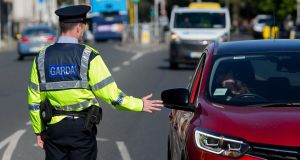 Garda members will be allowed to wear face masks during any of their interactions with members of the public, including at checkpoints and on foot patrols, for the duration of the Covid-19 crisis.

The National Public Health Emergency Team (NPHET) late last week said gardaí would be required to wear masks in enclosed settings such as houses or cars and if they expected to be in close contact with people for more than 15 minutes.

However, after clarity from senior Garda management at the weekend it has been confirmed that gardaí have permission to wear the masks anywhere they feel social distancing cannot be achieved.

That means the masks will be issued to Garda members for the first time since the Covid-19 crisis began, and they will use them when they see fit, in order to protect their own health and public health.

Last month the Garda Síochána Ombudsman Commission (Gsoc) said 70 complaints had been received from members of the public about the Garda’s policing of the Covid-19 public health restrictions. It said these included complaints about Garda members not wearing face masks at checkpoints and during other duties.

However, the Garda representative bodies pointed out Garda members were not allowed to wear the masks and had not been issued with them, despite asking repeatedly for the protective equipment.

The Garda Representative Association (GRA), which represents over 12,000 rank and file gardaí in the force, has welcomed the change in position. It was also pleased that it had been confirmed that its members could wear masks at checkpoints and on patrol rather than in enclosed spaces only.

GRA president Jim Mulligan said his association was still seeking priority testing for Covid-19 for those members of the Garda who needed it.

“The absence of facemasks at checkpoints has been a cause of concern to the public. Now there is a protocol that says if a garda cannot stay two metres away from a vehicle, for instance on a narrow road, they should put on a facemask,” he said.

“The GRA has been arguing for many weeks for greater use of facemasks by gardaí. We suggested that members should be equipped with masks on outdoor duties which they can put on based on their own dynamic risk assessment of any situation.

“Management indicated at the weekend their adoption of this position and have since confirmed that it applies to checkpoints and foot patrols.”

Mr Mulligan said gardaí were being spat at and deliberately coughed at by some people they encountered.

“When you have been spat at by someone claiming to be Covid-19 infected, the risk of infection is clearly a lot higher. Yet under the current arrangements, gardaí must join the queue,” Mr Mulligan said of priority testing not being made available to Garda members.

“Turnaround times for the general population are not reliable, and therefore totally inappropriate,” he said, adding gardaí and their families had to wait for long periods for test results. This showed a “shocking disregard for our members and their families”.