Immigration status cancelled for 55 taxi drivers, with some in sham marriages 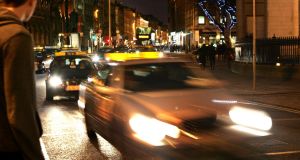 Some 55 foreign taxi drivers have had their immigration status in the Republic cancelled because they had taken part in sham marriages and committed other immigration crimes.

And as part of the long-running inquiry the Garda staged a day of action in Dublin on Tuesday.

Following Tuesday’s operation, the Garda has provided an update on the long-running inquiry into men who had entered into sham marriages and then applied for a taxi licence.

Gardaí believe these men had paid international criminal gang leaders large fees, of between €15,000 and €20,000, to be married in Ireland to women they had never met.

It also appears they were guided through the process of applying for a PSV licence, with forged documents supplied to some.

A total of 134 foreign taxi drivers have now been investigated for sham marriages and other immigration offences.

Yesterday the addresses searched were all raided under search warrant at 8am, with intelligence gathered and documentation seized.

The Garda has said of the 134 PSV, or taxi driver, licence holders and licence applicants investigated, some 64 cases had been concluded to date.

This has resulted in 55 men having had their immigration status revoked, with 25 of those men having been told they will be deported unless they leave the State voluntarily.

Four men have been arrested for deportation and two have already been removed from the State.

However, that activity follows two years of investigation under the Garda’s Operation Vantage rather than yesterday’s searches.

During the raids yesterday a further 15 people were identified for investigation on suspicion they had engaged in a sham marriage.

Seven people who gardaí discovered on the premises raided yesterday were found to be in the State illegally and one arrest was made on an immigration-related matter.

The operation was led by the Garda National Immigration Bureau (GNIB), supported by members of the Special Crime Operations unit; Roads Policing; DMR West Traffic Corps; the Carriage Office; the Garda Analyst Service; the Irish Naturalisation and Immigration Service; the Department of Social Protection; and the National Transport Authority.

Last August The Irish Times reported it emerged that the full scale of fraud in applying for taxi licences first became clear during an Ed Sheeran concert in Dublin.

During an operation last May, established to coincide with the concert in the Phoenix Park, some 110 taxi drivers were stopped at checkpoints.

Of those, 26 were suspected of having paid to marry a woman from Europe that they had never met so they could secure the right to reside and work in the Republic, according to gardaí.

All of the men were from outside the EU and gardaí had already revoked the immigration status they had secured when they married European women in the Republic.

One man, from India, was about to attend a special citizenship ceremony but that was deferred on suspicion his marriage was a sham.

At the time of last year’s operation, Garda sources said 58 new applications for PSV licences were lodged with the carriage office in January, 2018.

Of those, 40 came from men outside the EU. They described this as “way outside the norm”.

A garda officer said the increases had been a feature for around 18 months. And when some of the applicants’ immigration histories were checked it emerged they had previously tried to secure status in Europe.

The investigation into the immigration-based frauds within the taxi sector has continued since 2015.

It is part of the wider Operation Vantage which has focussed on sham marriages.