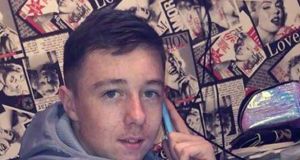 Gardaí suspect a botched murder attempt last week was done to avenge the killing of Keane Mulready-Woods, even though the 17-year-old was not confirmed dead at the time and none of his remains had been found.

There were also concerns that because the Drogheda feud now involves a number of senior criminals from Dublin, feud attacks may occur in the city.

Some associates of the key figures involved in the feud are also currently imprisoned meaning feud attacks between rival factions in prison were now also feared.

Teenager Mulready-Woods was last seen alive in his native Drogheda on Sunday, January 12th at about 6pm.

Gardaí believe he was killed in the town and dismembered that evening.

However, the first of his remains was not found until the following day – Monday, January 13th – at about 10pm in Darndale, north Dublin.

About 3½ hours before his limbs were found in a bag, a gunman opened fire on a taxi being driven on the Bridge of Peace in Drogheda; just before 6.30pm.

One of the feuding criminals was travelling in the taxi as a passenger with his girlfriend and both managed to flee from the car.

However, while they escaped uninjured the taxi driver was wounded. The driver has no links to crime.

One line of inquiry into that shooting is that associates of Mulready-Woods knew early on Monday he had been murdered.

Gardaí suspect in carrying out the shooting on the evening of Monday, January 13th, the dead teenager’s associates were trying to immediately avenge his murder, though he was still being treated as a missing person at the time.

It was not until about 3½ hours after that botched murder bid on the taxi passenger on Drogheda’s Bridge of Peace that limbs were found in a bag in Darndale. Those remains were not confirmed as those of Mulready-Woods for a further two days.

There are now serious concerns for the lives of a large number of men, some of them teenagers, as the feud continues to accelerate; much of the hatred driven by those involved taunting each via social-media messaging apps.

The gang Mulready-Woods was aligned to believes the Drogheda man it tried to shoot on January 13th in the taxi was present when the teenager was killed the previous day and there are now grave concerns for his life.

Another teenager, from Dublin, who knew Mulready-Woods well, is also regarded as being at risk of being targeted next in a feud attack. The young Dubliner is suspected of previously leading a group assault on a gang leader from Dublin. That gang leader is involved in the Drogheda feud.

He was close to Richard Carberry, the 39-year-old drug dealer originally from Dublin who was shot dead as part of the feud outside his home in Bettystown, Co Meath, last November.

The feud has now spread to a large group of criminals based not only in Drogheda but across the north east as well as in Dublin and in the prison system. A number of the men involved have also been active in a separate feud in Coolock, north Dublin, which claimed the lives of five men last year.