Analysis: Seizure of €3m in drugs shows officers are catching up with feuding cartels 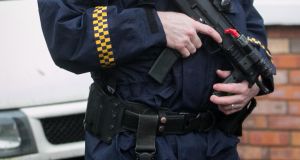 A Garda during a raid in Sallins Bridge, Co Kildare. Photograph: Gareth Chaney/Collins

Another day and another apparent strike by the Garda against the Kinahan drugs gang.

This time an assault rifle and cocaine and heroin valued at €3 million have been seized.

It follows a week of activity last week in which firearms and large sums of money were seized from the cartel.

Just before that, a consignment of cannabis valued at €37 million was found.

So why has there been so much activity now, and why are the apparent successes coming all at once?

Many view the 1996 murder of journalist Veronica Guerin as ground zero for organised crime in Ireland – the moment when the strength of and danger posed by the underworld became clear.

Her murder resulted in a major clampdown by the Garda on organised crime that went far beyond the establishment of the Criminal Assets Bureau (Cab).

However, after an intense four or five years of Garda operations prompted by the reporter’s murder, the current gangland scene began to emerge.

The most influential factor in giving rise to the new era was the Celtic Tiger.

The State was booming by 2000 and the demand for drugs had never been bigger as employment, wages and disposable incomes rocketed.

It meant young men – many of them teenagers – who would ordinarily have drifted into crime via burglaries, robberies and joyriding, went straight into drug dealing.

The more dominant among them quickly emerged as leaders of new drugs gangs.

For the first time, men in their late teens and early 20s were among the most successful and powerful figures in Irish organised crime.

Given their lack of experience and youthful hotheadedness, not to mention that many were themselves drug users, it is perhaps no surprise that 2000 and 2001 witnessed the birth of unprecedented gun feuding that would continue for a decade.

Some of the disputes would claim between 15 and 20 lives by the time they had run their course a decade later.

That level of violence and body count was unheard of at any time in the Republic before 2000.

The well-documented feuding gangs active between 2000 and 2010 included gangs in Limerick, Crumlin and Drimnagh, the Finglas gang led by Martin Hyland and later Eamon Dunne, the Westies in Blanchardstown, the Joyce gang in Coolock and the Sheriff Street factions, to name just some.

As those feuds raged, the older and more mature Christy Kinahan continued to build his drugs wholesale gang in Spain and was supplying the gangs in Ireland.

Gardaí were aware of the gang and enjoyed successes against it, although in the shape of seizing its drugs rather than catching and jailing its members.

From 2000-2010, the Garda simply had to prioritise the gangs killing on Irish streets, a very convenient scenario for offshore Kinahan.

By 2010, the economy’s collapse was complete and most of the men who had led the feuding for the previous decade were dead or in jail.

With the domestic feuds over – all of them stopped – Kinahan, however, got dragged into a dispute with the Hutch faction.

This time the bodies are falling in Dublin rather than on the Costa, meaning the pressure was on the Garda to rise to the challenge.

Since the attack at the Regency Hotel one year ago, additional monies and teams of gardaí have been set aside to get on top of the feud.

It took some months for resourcing to be put in place and another period of months for the groundwork to be done so that results could be achieved.

The Garda now has finally caught up with and is getting on top of – for now at any rate – the Irish wing of the Kinahan international crime syndicate.

Kinahan will be wondering whether members of his gang see the writing on the wall and if they have decided to co-operate with the Garda as a means of staying out of prison.

1 Ireland’s coronavirus restrictions may lift more quickly if case numbers keep falling
2 Pricewatch: Left on the shelf - what we are no longer buying
3 Tax on Covid-19 payment could cause 'terrible shock' late in year
4 Archaeologists are ‘quite sure’ they have found Red Hugh O’Donnell’s burial place
5 Maureen Dowd: Trump has been wearing a mask for years
Real news has value SUBSCRIBE