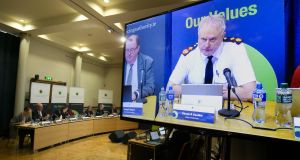 The Garda is solving significantly fewer violent crimes, including sexual offences, than before, the Policing Authority has said.

It has also emerged when the victim of a crime makes a complaint to the Garda but later withdraws their statement or is unable to go to court for a prosecution, the force still counts the case as having been detected, or solved.

At a public session of the Policing Authority in Dublin on Thursday afternoon, authority member Judith Gillespie revealed the falling detection rates and expressed her concern.

It was her understanding, she said, that last year the detection of sexual crimes was down by 19 per cent.

At the same time there had been marginal increases in the reporting of sex crimes to the Garda.

“The detection rates have quite significantly deteriorated,” she said of sexual crimes and other violent crimes against the person.

Deputy Commissioner John Twomey confirmed to Ms Gillespie that an offence that could not progress to court because a witness had withdrawn was counted as a detection.

However, he was unable to say what percentage of the Garda’s claimed detection rate was made up of crimes from which no conviction, or even prosecution, had resulted.

He addressed the 19 per cent decline in the detection of sexual crimes by saying these were offences that required expert and meticulous investigation.

Because of that, there was a time lag between the case being reported and going to court.

However, Ms Gillespie said that had always been the case and would not impact last year’s detection rate in any new way.

When Ms Gillespie asked Mr Twomey whether Garda members across the country understood the criteria needed to mark a crime as detected, Mr Twomey said he accepted there was an “urgent need” for gardaí to understand the crime counting rules better.

He said examples of proper crime counting and classification were being created as a training aid.

Separately, senior officers were due to be trained in the area of crime counting over the winter months.

Ms Gillespie noted that the goal of assessing the strength and risk of organised crime groups included in the annual policing plan was in danger of being lost for lack of resources.

“Undoubtedly organised crime has easy access to firearms,” he said, adding many recent attempted gangland murders had been thwarted by Garda members.

When a recent feud – the Kinahan-Hutch feud – began a significant number of gun murders linked to it was predicted.

However, the Garda had prevented many murders linked to it and intervened in other ways to catch those involved.

To date there had been around 40 such incidents he said.

The Policing Authority public hearing was continuing through the afternoon.