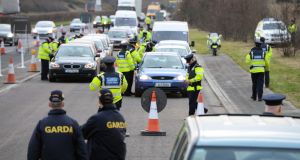 The Garda Represenative Association has been asked to provide evidence to support its claims that pressure from management was responsible for the fake breath tests. Photograph: The Irish Times

Gardaí who know the names of colleagues who inflated breath testing data can supply that information for investigation, acting Garda Commissioner Dónall Ó Cualáin has said.

His suggestion comes amid a worsening internal dispute between the Garda ranks over who is to blame for the inflating of breath test figures by almost 1.5 million.

Allegations made by the Garda Representative Association (GRA) that senior officers demanded its rank-and-file members inflate breath-testing data are being investigated.

Assistant Commissioner Michael O’Sullivan, who carried out the internal Garda inquiry into the debacle, is now investigating the GRA’s claims and wants it to provide evidence to support its allegations.

“If there is anyone out there that can provide evidence, those matters can still be looked into,” he said.

Garda members could “provide names of people who have done, allegedly, what was supposed to have happened”.

Just over a week ago the GRA issued a statement in effect rejecting the finding of the O’Sullivan investigation and resultant report that some rank-and-file gardaí inflated breath testing data.

The GRA said none of its 10,300 members had inflated the data, arguing management was solely to blame because it had put pressure on the lower ranks to “elevate” the figures.

For his part, Minister for Justice Charlie Flanagan declined to be drawn on who was to blame but described as “premature” the GRA’s remarks.

“I was disappointed with the comments,” he said, adding another report on the issue commissioned by the Policing Authority was imminent.

“I want all the skeletons out of all the cupboards,” he said at the passing out ceremony for 181 new Garda members.

More intensity was needed in the change process already under way if the promised “world class police service” was to emerge from recent controversies involving the force.

There were over 200 recommendations by the Garda Inspectorate, made down the years but never acted on, that Mr Flanagan believed needed to be resolved.

“I want those dealt with in a clearly defined time frame,” he said. “I want no delay; we need these reforms at the earliest opportunity. I want a number of reforms in place by the end of the year and I want the Policing Authority and An Garda Síochána to work closely together to ensure there are no more delays.

“If there are obstacles then I want them cleared,” he said. “There’s a timeframe for in excess of 20 further reforms by the end of the year and more into the first quarter of next year.”

He was in close contact with Josephine Feehily whose Policing Authority was monitoring the implementation of the Garda Inspectorate’s recommendations.