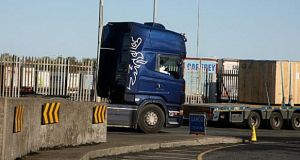 Gardaí have arrested a man suspected to have transported a trailer containing 39 migrants to a port in Belgium before they were later found dead in Essex in Britain.

Belgian authorities confirmed on Sunday that the man, who is in his 20s and is from Northern Ireland, is the same person they have been searching for, in conjunction with UK police, since the bodies were discovered last Tuesday.

A European Arrest Warrant has already been issued for the man and is expected to be executed this week.

Police in Belgium established the man’s identity late last week and have been liaising with UK and Irish authorities since then, a spokesman for the Belgian public prosecutor’s office said.

On Saturday, following a tip-off from Belgian police, a Garda operation was put in place involving dozens of officers including armed members of the Drugs and Organised Crime Bureau, the Emergency Response Unit and Garda immigration officers.

Gardaí stopped the man’s truck immediately outside the Dublin Port entrance. The truck he was driving is believed to be the one used to bring the trailer to Zeebrugge, Belgium.

Both the trailer and the truck cab seized by gardaí are linked to Ronan Hughes, a Co Monaghan-based haulier.

Documentation seen by The Irish Times shows the container was leased from another Irish company to Mr Hughes on October 15th. The truck seized by gardaí, a blue Scania, is registered to Mr Hughes.

Efforts to contact Mr Hughes and his legal representatives on Sunday were unsuccessful.

According to its licence plate the truck is registered in the Vratsa province of Bulgaria. The truck which brought the trailer to its final destination was also registered in Bulgaria and linked to an Irish company.

Following its seizure the vehicle was brought to the Garda vehicle depot in Santry where it is being examined in consultation with UK police.

The driver is being held in custody on separate, unrelated charges. Gardaí believe he spent the last three days in France and disposed of his phone before travelling to Dublin.

Maurice Robinson, the driver of the cab that brought the trailer to Essex, is due in court on Monday after he was charged with 39 counts of manslaughter on Saturday.