Gardaí seize pistols as part of investigation into Dublin gang 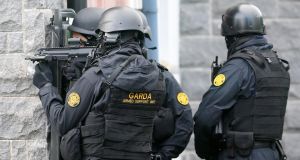 Gardaí seized firearms and arrested a man after intercepting a van in Co Roscommon on Wednesday night.

Members of the Emergency Response Unit seized three loaded 9mm pistols and arrested the driver of the van in Castlerea. The incident is believed to have formed part of a targeted intelligence operation involving surveillance of a west Dublin gang.

It is understood that the arrested man, who is in his early 30s, was not known to gardaí for involvement in serious crime.

He is being held under section 30 of the Offences Against the State Act. He can be held for up to three days before being charged or released.