Two men arrested after gardaí stopped their motorbike in Ballymun 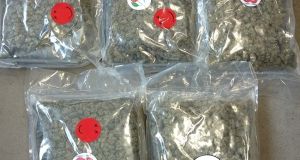 A box carried by one of the men contained 5.6kg of cannabis. Photograph: An Garda Síochána

Two men have been arrested after gardaí seized more than €100,000 of cannabis in Ballymun, Dublin.

The men, aged 19 and 20, were travelling on a motorbike when gardaí intercepted them on waste ground in an area known locall as Seven Pitches in Dublin 11.

One of the men was carrying a box which contained 5.6kg of cannabis herb with an estimated street value of €110,000.

Both ment were arrested and detained at Ballymun Garda station.