Goods worth €25,000 were seized during a planned operation at the Aviva stadium 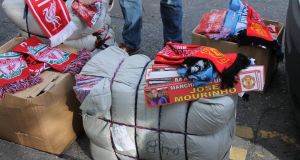 Some of the items seized outside the Aviva Stadium. Photograph: Garda Press Office

Gardaí have seized €25,000 worth of counterfeit soccer merchandise goods including hats, scarves and flags during planned raids in Dublin.

The operation was carried out during Wednesday night’s friendly match between Manchester United and Sampdoria at the Aviva stadium.

Gardaí from the Intellectual Property Crime Unit at the Garda National Bureau of Criminal Investigation took part in the raids which saw 21 vendors in the Dublin 4 area raided.

In total, gardaí seized about 225 hats, 200 placards, 140 flags and 2,220 scarves.Gardaí said that efforts are ongoing to stop counterfeit and sub-standard products making their way onto the market.

“The ongoing co-operation between various elements of law enforcement will continue, the objective being to stop counterfeit and sub standard products affecting the trade of genuine branded products. We will also continue to work with industry to ensure their intellectual property rights are protected in this regard,” said Detective Superintendent George Kyne.

Gardaí said part of the property seized would have also been for an upcoming match in the area this weekend.