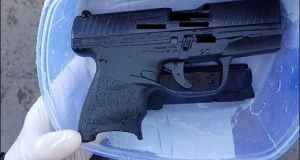 Gardaí have seized cocaine with an estimated street value of €500,000 and firearms from the occupants of a vehicle which failed to stop at a checkpoint in Dublin’s north inner city early on Tuesday morning.

The haul, which is one of the largest drug finds so far this year, was made after the vehicle crashed into a wall at Essex Quay at around 4.30am.

Two men and one woman, all aged in their 20s, were arrested at the scene which is located on the south quays of the Liffey near Temple Bar.

A short time earlier, gardaí carrying out a Covid-19 checkpoint on the Phibsboro Road, had attempted to stop the car but it had driven off at speed.

Gardaí from the Dublin region’s roads policing division immediately carried out a managed containment operation in pursuit of the vehicle.

Gardaí who gave chase quickly came on the scene of the collision at Essex Quay and noticed one of the occupants throwing an item into the River Liffey.

Members of the Garda Water Unit subsequently discovered two handguns later on Tuesday following a search of the river bed.

During a search of the vehicle, gardaí also recovered 8kg of suspected cocaine and a small amount of cannabis herb which have been sent to a laboratory for analysis.

The three occupants of the vehicle who were arrested at the scene are currently being held at Kevin Street, Kilmainham and Pearse Street garda stations under Section 2 of the Criminal Justice (Drug Trafficking) Act.