Gardaí seize cannabis worth €250,000 in Ennis and Limerick 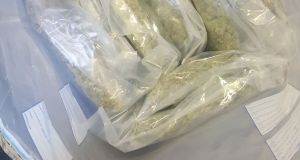 A photograph of the cannabis herb seized by gardaí. Photograph: An Garda

Gardaí have seized cannabis with an estimated value of €250,000 following the search of a car in Co Clare and a house in Limerick city.

The car was stopped a car at Latoon South, in Ennis on Friday evening and a quantity of cannabis was found as it was searched.

The driver, a man in his forties, was arrested and taken to Ennis Garda station for questioning.

During a follow-up search of a house in Ballinacurra Weston in Limerick a large quantity of cannabis herb was discovered.

Gardaí said the combined value of the cannabis seized in Ennis and Limerick was approximately €250,000.