Gardaí seize €600,000 worth of cocaine in Clondalkin 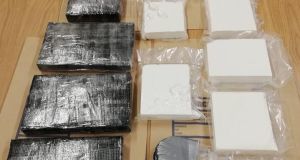 More than €600,000 worth of cocaine has been seized following a Garda search in west Dublin on Saturday evening.

Gardaí from the national drugs and organised crime bureau intercepted a car travelling on the Newlands Road, near Clondalkin, west Dublin, at 6.40pm on Saturday.

Following a search of the car 9kg of cocaine was discovered, with an estimated street value of more than €600,000. The exact quantity of cocaine seized will be subject to an analysis from the State forensic laboratory.

Gardaí arrested a man in his 30s at the scene, who is being questioned at Lucan Garda Station, a Garda spokesman said.

The individual is being held under Section 2 of the Criminal Justice (Drug Trafficking) Act, 1996.

McEntee agrees to take Dáil questions on Woulfe appointment 14:07
Boy settles for €450,000 hearing loss treatment case against HSE 14:01
One in five young people have experienced abuse by partner, study finds 13:52
December sky: Jupiter and Saturn to appear closest to each other since 400 years ago 13:52
Boris Johnson confirms Santa is ‘ready and raring to go’ 13:42