Gardaí seize €4 million worth of cocaine and cannabis 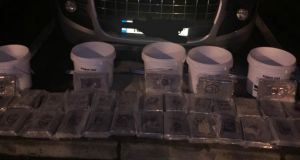 Gardaí said the drugs were intended to meet a high demand in the run up to Christmas. Photograph: Garda

Gardaí have arrested six people, two of them Dutch nationals in three separate drug seizures with a total value of €4 million in Dublin.

The first operation took place in a car park at Liffey Valley on Thursday, as 35kg of cocaine with an estimated value of €2.8 million were being transferred from a Dutch registered car, to an Irish one.

Members of the Garda National Drugs and Organised Crime Bureau, supported by the Special Crime Task Force, intercepted the transfer and three men and one woman all in their 40s were arrested. Two of those arrested are Dutch nationals. All four were detained on suspicion of drug trafficking offences at Clondalkin, Ballyfermot and Lucan Garda stations. Cash amounting to about €50,000 was later recovered in a follow up search at a house in Co. Meath.

Gardaí believe the suspects are connected to a criminal gang operating in north Dublin and Meath.

In a second operation gardaí from the Drugs and Organised Crime Bureau seized 45kgs of cannabis herb with an estimated street value of more than €800,000. The drugs were found in a van which was intercepted on the N7 at Rathcoole, on Thursday. One man in his 40s from Navan, Co Meath was arrested for drug trafficking offences. He is currently in custody at Clondalkin Garda station detained under Section 2 of the Criminal Justice (Drug Trafficking) Act 1996, and follow up investigations are on-going.

The third operation saw one man arrested and €210,000 worth of cannabis resin seized following a planned search by members of the Garda’s Finglas drugs unit.

Garda sources said the drugs were intended to meet a high demand in the run up to Christmas.