Gardaí seize €360,000 worth of cannabis in Balbriggan

Two arrested in connection with seizure; €3m worth of cannabis confiscated so far in May 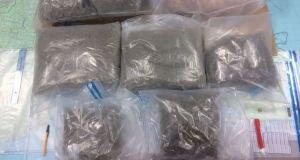 Cannabis seized by gardaí at a house in Balbriggan on Wednesday. Photo courtesy of An Garda Síochána.

Gardaí seized €360,000 worth of cannabis herb during a raid on a house in Balbriggan yesterday.

Officers from the Special Crime Task Force and the Drugs and Organised Crime Bureau supported by specialist units from the Dublin Metropolitan Region made the discovery and arrested two people as part of an operation in the north Dublin town on Wednesday.

The two people arrested, a man and a woman both in their 30s, were detained in Balbriggan Garda Station overnight where they remain in custody this morning.

Initial indications are that the drugs haul has an approximate value of €360,000, although this is subject to further analysis.

Wednesday’s seizure was one of a sequence of high-profile drugs busts carried out by gardaí over the month of May, with around €3 million worth of cannabis confiscated over the last three weeks as part of a clampdown on organised crime.