Gardaí seize €3.5 million worth of cocaine in north Dublin 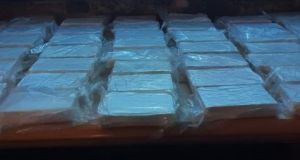 Gardaí seized cocaine worth an estimated €3.5 million on Thursday. Photograph: An Garda Síochana

A man in his 30s has been arrested after cocaine with an estimated street value of €3.5 million was seized by gardaí in Swords, north Dublin on Thursday.

The search was conducted by the Garda National Drugs and Organised Crime Bureau (GNDOCB) as part of an ongoing investigation targeting organised crime.

A man, aged 33, was arrested after the seizure and is currently being detained at Swords Garda station under Section 2 of The Criminal Justice (Drug Trafficking) Act 1996.

Assistant Commissioner John O’Driscoll, who oversees the Organised and Serious Crime unit, said: “Participation by a number of sections within An Garda Síochána with assistance provided by Customs Revenue Service in this operation, has resulted in another significant seizure of a substance believed to be cocaine, which prevents further damage being inflicted within our communities.”