Gardaí seize €250,000 worth of stolen bicycles in south Dublin 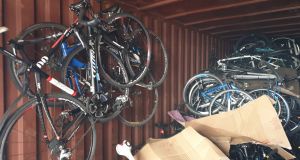 Gardaí have seized €250,000 worth of suspected stolen high-end bicycles from a shipping container in south Dublin.

Members from the street crime unit at Pearse Street Garda station had been investigating the large-scale theft of bicycles from Dublin city centre in recent months.

Inside they found 116 bicycles of “all makes and models”, a Garda spokesman said. “It is estimated that the value of the items is approximately €250,000 owing to the uniqueness and specialisation of the items.”

The Garda said it will endeavour to identify the bicycles’ owners “in due course”. Photographs of bicycles not returned to their owners will be circulated via the media in the coming weeks, it said.

Images released by the Garda show dozens of high-end road bikes piled to the roof of the container.

Stolen bicycles are typically shipped abroad for sale. Almost 4,000 bicycles were reported stolen in Dublin last year, a rate of more than 10 every day.

Of these, just 286 – about 7 per cent – were recovered. Campaigners say the true number of stolen bicycles could be as much as three times higher as many people don’t report thefts to gardaí.

Some 70 per cent of reported bike thefts in Ireland occur in Dublin, with the average value of a bicycle estimated at €510.

Analysis released by the Garda last year shows one-third of stolen bikes were taken from the owners’ homes while more than half (53 per cent) were stolen on the street.

More bikes are stolen on a Friday than on any other day of the week.

– Lock your bike tightly to an immovable object;

– Keep the lock off the ground;

– Take a photo of your bike, note the serial number and email it to yourself so that you have a record of it, and

– Lock your bike indoors or in well-lit areas if possible.