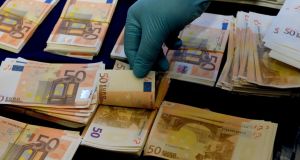 Some of the couterfeit €50 notes seized during a Garda operation targeting subversive activities. Photograph: David Sleator

The Garda has urged business people and the general public to check their cash and look out for suspect €50 notes which may be in circulation. The monetary value of counterfeit €50 notes seized in a Garda operation in Dublin and Meath last weekend is now being put at €2.1 million.

The figure emerged when gardaí put on display an estimated €610,000 from the haul, along with the large specialised printing press and related machinery used to produce the fake notes.

The printing equipment was so large and heavy that it had to be transported on the back of a lorry to Garda Headquarters in the Phoenix Park to be photographed by the news media.

With no heavy plant available to lift it from the vehicle, journalists and photographers invited to inspect the four large pieces of machinery were forced to climb on to the truck.

Equipment
The equipment, which also included computers, and counterfeit notes, was found when gardaí raided a residential property in north Dublin on Sunday and followed that with a related search of commercial premises in Co Meath. The identity of those involved and origins or intended destination of the fake currency could not be disclosed because the matter was before the courts.

However, while the first stage of the Garda operation yielded €20,000 in fake notes, it has now emerged that €50 notes at various stages of completion, with a value when completed of just over €2.1 million, have been seized.

Some €110,000 in completed high-quality fake notes was part of the haul. Gardaí also found four cardboard boxes containing sheets of paper with four counterfeit €50 notes on each, ready for cutting. There were 2,500 sheets in each box, bringing the value of the fake notes in each box to €500,000, or €2 million combined.

Display
At yesterday’s press conference where the notes were put on display, Supt Dave Taylor described the seized consignment as “sophisticated”.

“If you were using an ultra violet light behind the counter of a business taking cash and you checked the watermark on these, they would pass that test; they’d look genuine. We’re concerned that notes of this quality are being manufactured. To the untrained eye it would pass quite easily. We’re asking business people to check their stock, check what money they have. And if they come across anything like this to contact An Garda Síochána immediately.

“And it’s been part of our strategy to target groups, both criminal and subversive, and thwart them in this business.”

He added if large amounts of notes were flushed into circulation nationally it would damage the Republic’s reputation.

Family of Irish man detained in China: ‘Nobody is helping us – we are just begging for help’ 06:00
Covid-19: Is Christmas really the problem? 02:11
Brexit talks stall after tense week of negotiations 01:22
Sinn Féin's Brian Stanley to step away from politics for week 01:05
Miriam Lord: Sinn Féin has become Ireland’s new political delete 01:00

1 Family of Irish man detained in China: ‘Nobody is helping us – we are just begging for help’