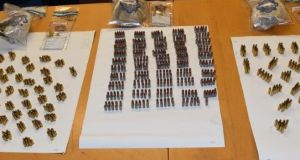 A member of the public found the bullets wrapped in plastic while out walking in Bishop’s Wood by the village of Dundrum on Saturday. Photograph: Garda Press Office

Gardaí have seized more than 1,300 rounds of ammunition which were found in a wood in Co Tipperary at the weekend.

A member of the public found the bullets wrapped in plastic while out walking in Bishop’s Wood by the village of Dundrum on Saturday.

They alerted local gardaí who carried out a technical examination of the scene and searched the surrounding areas. No further ammunition was discovered.

The package was taken to Tipperary Town Garda station where it was photographed and examined.

It was found to contain three further packages which each contained different calibres of bullets, amounting to more than 1,300 rounds in total.

The bullets have been sent for technical analysis by the Garda ballistics sections.

“No arrests have been made and the investigation is ongoing,” a spokesman said.

The Garda said it appears the bullets may have been hidden in the woods for some time.

Initial speculation is that they date from the Troubles and may have been hidden there by an IRA unit.