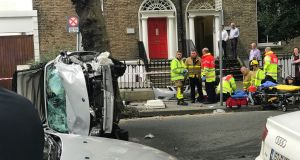 The scene on Tuesday on Adelaide Road: One of the injured, a 25-year-old Frenchman, remained critically ill in hospital on Wednesday night. Photograph: Jeremy Crain

Gardaí are treating as a tragic accident a road traffic collision in Dublin in which a car mounted a footpath and hit pedestrians.

Road rage, speeding or any terror link have been ruled out, and gardaí believe the driver at the last moment attempted to take evasive action.

However, while gardaí believe she attempted to drive into a tree to stop the vehicle, the automatic Saab mounted a footpath and hit five people.

One of the injured, a 25-year-old Frenchman, remained critically ill in Beaumont Hospital, north Dublin, on Wednesday night. He had initially been taken to St James’s Hospital but later transferred to Beaumont for more specialist treatment.

A second injured pedestrian was also in hospital with serious injuries but sources said he was no longer in a critical condition.

The three other pedestrians, all men, also remain in hospital, but their injuries were never regarded as life threatening.

The woman driving the vehicle remains in St Vincent’s hospital where her injuries are not life threatening. Her car, with her wheelchair in the back, came to a stop on its side.

The rush-hour collision occurred near the junction of Adelaide Road and Earlsfort Terrace in the south inner city at about 6.15pm on Tuesday.

It ended with the Saab convertible vehicle coming to rest on its side in the middle of Adelaide Road.

The emergency services were contacted and a fleet of ambulances came to assist the injured people.

Paramedics administered emergency care to the injured at the scene before they were taken for further treatment to Tallaght hospital, St James’s Hospital and St Vincent’s hospital.

The scene of the collision was sealed off as the Garda Síochána, alerted by shocked witnesses, arrived. Paramedic crews from a fleet of ambulances also went to the scene and they tended to the injured before they were taken to hospital.

Garda collision scene investigators examined the stretched of road where the collision took place and witnesses have been spoken to.

However, the investigation team based at Pearse Street station is seeking further witnesses.

The Garda team has already begun seeking footage of the incident recorded on CCTV in the area.

They are also asking any motorists or other road users who may have been using cameras at the time, such as dashcams, to come forward and aid the inquiry.