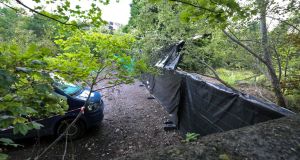 The scene of the search for the body of Trevor Deely in Chapelizod, Co Dublin. Photograph: Collins

Gardaí searching a site for the remains of Trevor Deely have found a firearm. However, sources stressed the discovery of the gun may not be linked to Mr Deely’s disappearance and presumed murder.

The gun has been found on a three-acre site in Chapelizod, north Dublin, where a search has been under way since late last week.

Garda sources said while the discovery of the gun would inevitably be interpreted as progress in the case, they cannot be sure of that.

“Until and unless we find human remains we have absolutely nothing,” said one source.

“Late next week it is possible we would be concluding this search having found nothing and with the information we’ve received having proved to be useless.”

Another source said information about other historical unsolved cases had been investigated in the past and raised hopes but had come to nothing.

“We don’t know what we have and we’ve no information suggesting this gun is linked to the Trevor Deely case; it’s as simple as that.”

Gardaí have received information that Mr Deely was shot dead in an on-street chance encounter in at the time he vanished.

He went missing on December 8th, 2000, on his way home from a Christmas party. The Bank of Ireland worker, aged 22 years at the time, was last captured on CCTV on Haddington Rd, south Dublin, just after 4am on his way home.

His disappearance has remained a mystery since then. However, gardaí have recently come into information suggesting his was shot close to Haddington Rd and his remains concealed at the site in Chapelizod now being searched.

Garda sources believe expectations, among the public, of a breakthrough have been raised “far too high” and that the information they have received has yet to be proven.

“The gun may be part of the case or it might have been discarded on that site from some other crime over the years, we simply don’t know,” said one experienced officer.

The dig at the site was expected to continue for at least a number of weeks.

In April of this year gardaí published enhanced CCTV images showing him conversing with an unidentified man during his last known movements.

The enhanced footage captures a man dressed in black outside the rear entrance of Bank of Ireland’s asset management offices on Wilton Terrance, Dublin 2, where Mr Deely worked.

The man appears at 2.59am and takes cover behind a pillar. He waits there for approximately 35 minutes.

Mr Deely then enters the offices, and has a coffee inside with a colleague. He emerges 37 minutes later with an umbrella.

He leaves the umbrella against a wall, buttons up his coat, and begins walking towards Baggot Street Bridge and shortly after that he is last recorded on Haddington Rd CCTV never to be seen again.