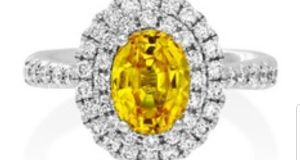 An image of one of the stolen items. Photograph: Garda Press Office

Gardaí are searching for a gang specialising in distraction theft and which stole money and cash from a jeweller and antique dealer in Co Donegal.

The robbery occurred last Saturday on Main St, Letterkenny, when a five-member gang - four women and a man - targeted a shop at 4.30pm.

Some of the group distracted staff by asking to look at items of jewellery while one of their accomplices gained access to a back office and stole jewels and cash.

Some of the items stolen were rare antiques, with more than 20 pieces of jewellery, most rings, were taken as well as cash.

Gardaí have now issued a description of the haul and a photograph of the car used by the gang.

The robbery occurred at Mourne Antiques & Jewellery just four months after it had opened new premises in the Co Donegal town.

“The items stolen included cash and jewellery, among them was an 18 carat white gold oval yellow sapphire cluster ring,” the Garda said in a statement.

Gardaí said the gang arrived at the premises and left together in a blue Ford S-Max and detectives in Letterkenny have been working with their colleagues in the PSNI in a bid to track down the vehicle.

It is believed the car may have been driven through neighbouring Co Derry and into Dublin and an alert for the car and its occupants has been shared across the Garda and PSNI.

Anyone who believes they have seen the vehicle is asked to contact Letterkenny gardaí on 074-9167100 or any other Garda or PSNI station.