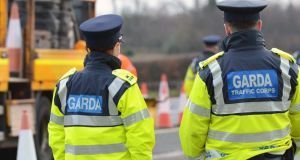 James Brennan from Enniscorthy was killed when the car he was driving collided with the stolen vehicle outside Ferns, Co Wexford on Monday. Photograph: Eric Luke

The search for two men whose stolen car crashed into another vehicle killing the 81-year-old driver has been extended to include airports and ports over fears the suspects may try to flee the country.

One of the men has links to the UK and recently spent time there. Gardaí have used CCTV footage taken at a service station just before Monday night’s fatality in Co Wexford to identify one of the men.

The identity of the other suspect is not as clear, although a number of firm lines of inquiry are being followed and gardaí are confident of finding both suspects.

James Brennan from Enniscorthy was killed when the car he was driving collided with the stolen vehicle, which was been driven by the suspects.

Mr Brennan was returning to his home in the Cherry Orchard area of Enniscorthy after a night socialising with friends.The fatal collision occurred about 10.30pm on the N11 near Ferns, Co Wexford.

The stolen Volvo S60 the men were in hit the Toyota Corolla which Mr Brennan was driving.

A woman in her 50s, who was travelling as a passenger in Mr Brennan’s car, was injured and was taken to Wexford General Hospital. There were fears she had broken her back but she sustained a broken hip and other non life-threatening injuries.

The Volvo, which was stolen in Wicklow town, was badly damaged in the crash and the two suspects fled the scene on foot through fields. They then stole a red Volkswagen Passat from a nearby farmyard. Gardaí believe they escaped in that car before the emergency services arrived to tend to the Mr Brennan and the injured woman.

The Passat was later found abandoned near Monageer, 18km from the crash scene.

Another car was stolen nearby and gardaí believe it may have been taken by the same men. The suspects have not been seen since the fatal crash but CCTV taken from a service station in Arklow shows them filling the stolen car with petrol earlier on Monday.

They then drove off without paying for the fuel and met Mr Brennan’s car on the N11 a short time later.

The suspect whose identity has been confirmed is well known to gardaí in the Wicklow area. He is currently charged with an attack on a couple in the county.

He was free on bail this week. The suspect left the Republic for an extended period in the past and returned recently.

Gardaí believe he spent time in the UK where he has contacts.

They fear he may try to flee back there to evade being arrested so checks at airport and port exit points have been stepped up.

Gardaí also said his bail for the other crimes would be revoked if arrested, meaning he would face a lengthy period on remand in prison before his cases reached the courts.