Fourteen people have died, most of them linked to Hutch gang, since September 2015

Gardaí are investigating a suspected case of conspiracy to murder a particular individual, believed to be a member of the Hutch family. 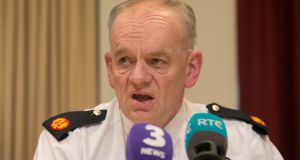 Gardaí say they have intervened to foil almost 50 planned killings in the Hutch-Kinahan feud.

Assistant Commissioner John O’Driscoll told a media briefing on Monday these were operations where there was “a definite plan to murder” and where gardaí believe that if there was no intervention, “death was imminent” for the people being targeted.

Fourteen people have died, most of them linked to the Hutch gang, since the series of murders began in September 2015.

In some cases, gardaí had intervened and the intended targets were warned of the risk and advised to remove themselves from the threat, Assist Comm O’Driscoll said.

In other instances, such as an operation in Dublin on Saturday morning, firearms were seized from people who were “ close to executing their plan, for want of a better word”, and it was very clear “what was about to take place”.

Acting on information and believing that a person’s life was at risk, gardaí “moved in” on Saturday morning in an operation in Dublin’s north inner city, Assist Comm O’Driscoll said.

Three people were arrested in the Gardiner Street area and a quantity of firearms were found. A fourth arrest was made later in the day. All four remain in custody.

Gardaí are investigating a suspected case of conspiracy to murder a particular individual, believed to be a member of the Hutch family.

Assist Comm O’Driscoll said the Garda operation was having a “big impact” on reducing the number of people willing to carry out murders for criminal gangs.

Seven people are currently before the courts facing charges of conspiring to murder .

“The number of people before the courts in relation to conspiracy to murder is unprecedented,” he said.

Assist Comm O’Driscoll said that as well as a range of different Garda divisions being involved in the targeting of organised crime, there was also an unprecedented level of working with law enforcement agencies in other jurisdictions.

He was flanked at the briefing by officers from a number of Garda divisions, but also by Ian Cruxton, Deputy Director International Operations at the UK’s National Crime Agency.

“Whenever the criminals decide to stop this activity that is when we will also be able to wind down this huge operation we have in terms of preventing the loss of life, but not until then,” the assistant commissioner said.

Asked if senior criminals who were believed to be in the Middle East were beyond reach, he said information was being gathered about those who might be organising crime from a distance and charges of conspiracy to murder could be brought in time.

These had been almost 50 situations where there was a definite plan to murder and where gardaí believed if there was no intervention death was imminent, he said.

“Obviously a number of deaths have taken place and we do not claim we have the capacity to intervene on every occasion but a huge amount of success has been achieved in recent times.”

There are those who may be tempted to think that a slice of the wealth accumulated by criminal gangs “might come their way if they assist organised crime gangs in terms of the targeting of potential victims and clearly we would advise they should resist that temptation.”

Some recent arrests had been very significant and involved “significant players in the organised crime networks,” he said.

1 Brightest comet of the century visible in Irish skies for the next week
2 Johnny Depp: Ex-wife or friend defecated in bed in ‘fitting end’ to marriage, court hears
3 Reopening of pubs that do not serve food may be delayed beyond July 20th
4 Man tried to steal cars while high on crack and holding chihuahua
5 Delicious details of Mary Trump’s book open up world of president’s family
Real news has value SUBSCRIBE