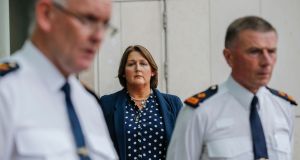 Evidence has been secured that directly links other south Armagh men to the murder of Det Garda Adrian Donohoe, and senior Garda officers are confident the conviction of Aaron Brady (29) on Wednesday will be followed by other trials.

Minister for Justice Helen McEntee said the Garda investigation would be “relentless”. Deputy Commissioner John Twomey warned the other members of the murder gang that “we’ll be knocking on your door”, adding no border would protect them.

Brady, New Road, Crossmaglen, Co Armagh, was on Wednesday found guilty of the capital murder of Det Garda Donohoe by an 11 to one majority jury verdict at the Central Criminal Court.

Det Garda Donohoe, a 41-year-old married father of two, was shot dead on January 25th, 2013, as he stepped from his Garda car after he and a colleague arrived at Lordship Credit Union, Bellurgan, Co Louth, to provide an armed cash escort for staff carrying cash.

On Wednesday following the conviction, Caroline Donohoe, the widow of Det Garda Adrian Donohoe, thanked the jury in the trial.

Ms Donohoe said she was very thankful Brady had been found guilty.

“I would like to most sincerely thank the jury for sticking with this trial for so long, and to my Garda colleagues and to the prosecution team,” she said, adding she was issuing her thanks on behalf of her son and daughter, Niall and Amy. Also speaking outside the Criminal Courts of Justice on Wednesday, Garda Colm Donohoe paid tribute to his brother’s Garda colleagues in Dundalk.

Brady’s conviction for capital murder carries a 40-year sentence. He was also convicted of stealing €7,000 from the credit union and is due to be sentenced in October for both the murder and robbery.

The Irish Times understands technical evidence relating to the other suspects’ telephone activity and their movements on the day of the murder has been gathered as well as CCTV footage linking some of the suspects to the crime scene and to Brady on the day.

The evidence in relation to one of the suspects is especially strong and gardaí believe he will be convicted in the future. Gardaí were, according to one source, also “quietly confident” about the prospects of convicting other gang members and those who helped them after the murder.

A separate criminal investigation is also under way into efforts during the trial to intimidate witnesses. At one point a video of a witness being interviewed by gardaí was shared on social media with messages branding him a “rat” for “touting”. That man, and four other witnesses, did not give evidence at trial and gardaí believe a significant campaign was run to intimidate witnesses.

The four people who were with Brady, the gunman, on the night of the murder, are all from south Armagh and were members of a gang involved in armed robberies, ATM thefts and the theft of plant machinery.

At least two of the men have lived in the United States for most of the time since the murder and currently reside in a major city on the east coast. Some of the suspects have also spent periods in Britain and Australia since the botched armed robbery and murder seven and a half years ago. Two of the four suspects have citizenship for another country.