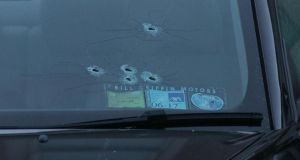 Bullet holes in a car at the scene of Thursday night’s shooting in Mill Close Stamullen, Co Meath. Photograph: Collins

Gardaí believe two men were involved in the shooting of a man in Stamullen, Co Meath on Thursday night that left him seriously injured in hospital.

Detectives said last night they are satisfied the incident was not feud related or related to the ongoing Kinahan-Hutch feud.

Gardaí are looking to trace the movements of two cars ; one was a blue Seat Leon ST which drove towards Stamullen village after the shooting. The second car is a white BMW.

It is now believed that eight shots were fired from a handgun at the victim, a man in his 30s, who was in the driveway of his house in Mill Close at about 7pm.

He is understood to have suffered at least two gunshot wounds, one to his abdomen area and another to his arm which was possibly sustained as he tried to defend himself. He was brought by ambulance to Our Lady of Lourdes Hospital in Drogheda, Co Louth where he was under Garda protection.

His condition is not believed to be life-threatening.

The investigation is being led by gardaí in Ashbourne and a spokesman said they were appealing for witnesses to the shooting or anybody who knows anything about it to contact them at Ashbourne on 01-8010600.

Independent councillor for Laytown Sharon Keogan said it was a “terrible, shocking” incident.

“It’s shocking to think something like this would happen in a quiet family estate. A lot of people would have only moved to the locality in the past few years and there are rarely incidents like this.

“Locals are shocked and upset by the shooting tonight,” she added. “Gangland violence is spreading outside Dublin and respects no area or community. My thoughts are with the community in Stamullen tonight.”

Fianna Fáil TD for Meath East Thomas Byrne tweeted: “Outrageous and disgusting to carry out a shooting anywhere - but in a suburban housing estate teeming with kids - it’s subhuman,” he said.

Stamullen has been scene of a number of recent criminal incidents.

In June, gardaí seized €3.8 million worth of cannabis and ecstasy in the Stamullen area in what they described as a “very significant capture”.

Last September, gardaí launched an investigation after a single shot was fired at the door of a house in Mill Close, Stamullen, the same estate where the shooting occurred on Thursday night.