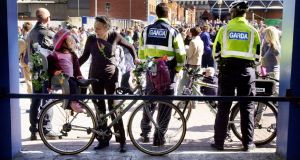 The Association of Garda Sergeants and Inspectors say the roads are so dangerous for cyclists that they need to take action to protect themselves by wearing safety gear. Photograph: Matt Kavanagh

Cyclists need to undergo a change in “mindset and attitude” and always wear fluorescent clothing and helmets, the Association of Garda Sergeants and Inspectors (AGSI) believes.

The mid-ranking Garda members said the roads were so dangerous for cyclists that they needed to take action to protect themselves.

The call comes as cycling deaths are increasing. In the first three months of this year, five cyclists have been killed on the roads of the Republic, compared to 10 in all of last year.

Sgt Claire Healy of the Dublin Metropolitan Region traffic unit told delegates at the AGSI annual conference in Killarney, Co Kerry, that the number of cyclist fatalities and serious injuries sustained was obvious.

“Especially in Dublin; it’s huge,” she said. “So we’d like to improve safety and maybe shift the mentality or attitudes of cyclists to encompass their own safety.

“You wouldn’t send your child out on their bike without a helmet so why not have the same protection yourself?”

She believed it was imperative cyclists dressed to be seen in Dublin city centre in particular.

“If you are cycling around the city centre . . . you see people daily stepping out and trucks taking corners short and so on. So you need to protect yourself – and fluorescent jackets and helmets are the way to go.”

She said while some people felt it would be difficult to police, the same was said about helmets and other safety kit for motorcyclists when they were made compulsory.

“It’s about changing people’s attitudes and behaviour and education; people develop and move on.”

He believed it “wasn’t ludicrous to suggest” cyclists should follow their example for their own protection.

If a new offence of failing to wear hi-vis clothing and helmets was introduced, the Garda could initially give a verbal warning to those cyclists in breach of the legislation. He hoped that would encourage most bike riders to comply with his proposed new measure.

And those cyclists who persisted in their refusal to wear the safety kit could be dealt with under the fixed-charge notice system. This would involve fines.

Delegates at the closing session of the AGSI conference voted in favour of a motion to make helmets and fluorescent clothing compulsory for cyclists.

The association’s leadership will now lobby the Department of Justice to consider the measure. However, extending compulsory wearing of fluorescent clothing for all pedestrians was not put to a vote at the conference because it was regarded as unenforceable.