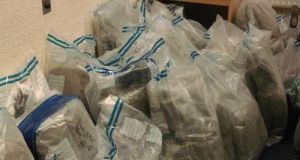 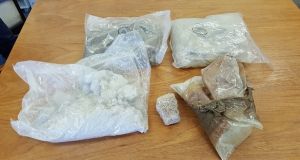 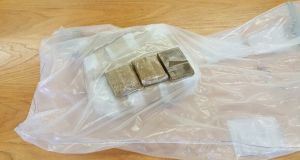 Gardaí on Friday seized €3.8million worth of cannabis and ecstasy in Co Meath in what they described as a “very significant capture”.

The street value of drugs was revised downwards from ¤5.3million on Friday afternoon after the substances were re-evaluated.

Asked about the nature of the find, gardaí said there was no indication at this stage that it was linked to the Dublin-based Kinahan gang.

Gardaí made the find in a planned search of a house, a vehicle and lands at about 2.45pm on Thursday after obtaining a District Court Warrant to search the premises.

A 31-year-old man from the north-east was arrested at the scene and was being detained under Section two of the Criminal Justice (Drug Trafficking) Act at Kells Garda station. He can be held for up to seven days.

Initially gardaí believed the seizure in the Clinstown area of Stamullen in east Meath included 30kg of cocaine. However gardaí “re-evaluated the weight and quantities of the substances that have been seized,” Chief Superintendent Fergus Healy of the Meath Garda Division told a press briefing on Friday afternoon.

Officers “seized a significant amount of cannabis herb and cannabis resin as well as MDMA [commonly known as ecstasy], approximately €3.8m worth of drugs,” he said. Chief Supt Healy described it as “ a very significant capture for our local drug detectives and it’s a significant success.”

The drugs have been put in storage and have to undergo forensic laboratory testing.

Gardaí say the operation has had a significant impact on local issues of drug activity in the north east area. “There has been ongoing drug activity in the north east area. It’s a wider problem like it is in any other community as we know. It’s an ongoing battle. So it’s an issue that we pursue on a daily basis and we have a dedicated team working on it continuously so it is a good succcess for us in the battle,” Chief Supt Healy said.

Detective Inspector Gordon Englishby from the Meath Garda Division told the press briefing in Kells that “the primary search was at a private residence in Stamullen, there was a vehicle adjacent to the premises that was searched as well as surrounding lands and fairly extensive search of the private residence”.

The intelligence-led operation by officers from the Meath Garda Division was assisted by gardaí from the Ashbourne Detective Unit and the Garda Dog Unit.